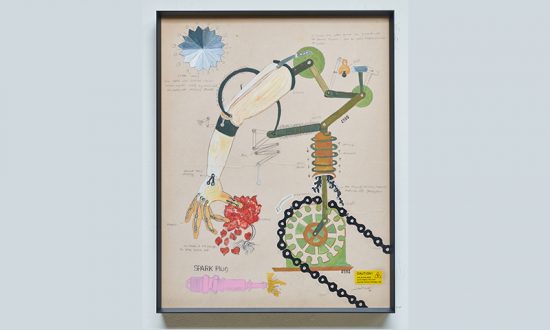 Vadehra Art Gallery is pleased to announce a collaborative initiative working with South South, a platform bringing together galleries, artists, curators and collectors from the developing world or ‘Global South’. Our current ongoing contemporary exhibition ‘The (Pro)found Object’ will be the topic for our discussion. It will be streamed as a Zoom webinar on September 23, 2021 at 5 pm IST. Associate Director and Curator of the Ishara Art Foundation in Dubai, Sabih Ahmed will be in conversation with the four exciting participant artists of the exhibition: Biraaj Dodiya ( Mumbai), Shailesh B.R ( Delhi), Moonis Ahmed Shah ( Melbourne) and Youdhisthir Maharjan ( Boston). They will discuss their art practices, the role of found objects in art and their philosophies regarding subjectivity, sustainability and structures.

Born in 1993, BIRAAJ DODIYA is a Mumbai-based visual artist. She received her MFA from New York University in 2018, and a BFA from the School of the Art Institute of Chicago in 2015. Her selected exhibitions include (ME)(MORY), Vadehra Art Gallery, New Delhi (2021); Stone is a Forehead, Experimenter, Kolkata (2020); Burn Your Finger, and Kiss it Yourself, 80WSE, New York (2017); and Send Your Location, 33 Orchard, New York (2017). Dodiya is the recipient of the 2021 Civitella Ranieri Visual Arts Fellowship, the 2018 Jack Goodman Scholarship in Art and Technology, and was nominated for the 2018 Dedalus Foundation MFA Fellowship in Painting and Sculpture. The artist lives and works in Mumbai.

Born in 1986, SHAILESH B.R. received a bachelor’s degree in fine arts, specialising in painting, from the Chamarajendran Academy of Visual Arts, Mysore, and has a post-graduate diploma from the Faculty of Fine Arts, MSU, Baroda. Shailesh’s solo exhibition Tarka was held at Vadehra Art Gallery, New Delhi (2017). Shailesh has participated in various group shows, including the CIMA Art Award Show, Kolkata (2014); Drawing 2014: Seven Decades of Indian Drawing, Gallery Espace, Delhi (2014); Student’s Biennale, Kochi 2014, a parallel event to the Kochi-Muziris Biennale 2014; Remembering the Present, Vadehra Art Gallery, New Delhi (2018); and, Narrow Road to the Interior, Vadehra Art Gallery, New Delhi (2019).He has been part of the Khoj Peers 2015 as an artist-in-residence and was invited for the Khoj Peers Share in October 2013. In 2014, Shailesh has received the Inlaks Fine Arts Award and was also invited to Sandarbh Art Residency, Partapur, as an artist-in-residence. In 2016, he was awarded the FICA Emerging Artist Award and travelled to Switzerland for a residency. In March 2017, he was invited for the Khoj residency in Goa. Shailesh’s solo exhibition The Last Brahmin will be held at the prestigious Villa Arson in Nice, France from 14 February to 13 May, 2020. The artist lives and works in Vadodara, Gujarat.

Born in 1984 in Nepal, YOUDHISTHIR MAHARJAN completed a bachelor’s of arts in creative writing and art history from New England College, New Hampshire, USA, and a master’s of fine arts at the University of Idaho, USA. Maharjan has since exhibited extensively in India, Nepal, the United States and the UK. Some of his noteworthy exhibitions include solo shows at TARQ, Mumbai; Prichard Gallery, Idaho (2012); New England College Gallery, New Hampshire (2012); and Nite Light at Indigo Gallery, Nepal (2004), as well as group exhibitions including Desai/Matta Gallery, San Francisco (2017); Currier Museum of Art, Manchester, New Hampshire (2017); TARQ, Mumbai (2016); Saffron Art, New York (2016); Winchester Gallery, UK (2016); and Seraphin Gallery, Philadelphia (2016), among others. His work has also been part of large-scale exhibitions such as the Kathmandu Triennale (2017) and the Boston International Fine Art Show, Boston Center for the Arts (2015). The artist currently lives and works in Boston, Massachusetts.

Born in 1992 in Kashmir, MOONIS AHMAD SHAH works across various media such as installation, sculpture, programming sound and video. He is currently a doctoral candidate and a sessional lecturer at the University of Melbourne and is a recipient of the Australian Graduate Research and Training Programme Scholarship. In 2017, he received the Emerging Artist Award from the Foundation of Indian Contemporary Art. He has shown his work at various national and international exhibitions, including the Margaret Lawrence Gallery, Melbourne (2021); Vadehra Art Gallery, New Delhi (2019); Goa Centre of the arts (2019); Sattlekamer, Bern (2018); Auckland Art Fair, New Zealand (2018); Rohtas Gallery, Pakistan (2017); 1 x 1 Gallery, Dubai (2017); UNIDEE, Cittadelarte, Italy (2016), to name a few. He also completed a three-month residency at Stadtgalarie, Bern, and HSLU, Lucerne, Switzerland organized by the Pro Helvetia Swiss Arts Council. The artist lives and works between Kashmir and Melbourne.

South Asia School Principals’ Conference | 12 – 15 May, Thailand
Edu Alliance Launches new Podcast series
IBEForuM Hosts the Digital Learning APAC Summit to Decipher the Hindrance Faced by the Education Sector in the APAC Region
IBEForuM hosts SMART SCHOOL SUMMIT – SAUDI (Virtual) to focus on the key challenges of the Education Sector
How are EdTech Platforms Encouraging Kids to Create Content Through Innovative Means as a Mode of Learning?
If Software is Liquid, How Can the Role of a Devops Engineer Be Anything Less Than Fluid?
CONTACT US