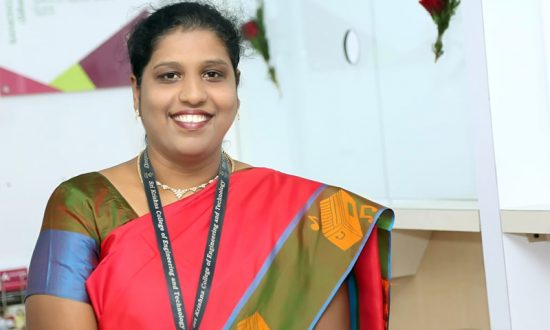 Education is the very foundation on which we build a promising future. The very purpose of education is to teach values, develop stimulated intellect, dig out opportunities to question what exists, and contribute to the growth of the human society. In this respect, an educator’s role counts for one of the most important. As a woman educator, the gravity of the role further increases. However, Janet has been, for years now, fulfilling this role to the hilt! A proud change-maker, who is unafraid of going the extra mile, Janet J has pushed limits to reach for the sky.

Currently the Principal of Sri Krishna College of Engineering and Technology, she has been sharing her knowledge, motivating those around her to think outside the box and march firmly towards goals and evolve successfully through her life’s experiences. Education in the DNA Hailing from a family of educationalists, Janet’s parents have held various positions like Higher Secondary School Headmaster and PG Teacher, and she holds her father, Mr. Jayaraj as her role model. “He has always given me the courage and confidence to be the best that I could be at whatever I did. He helped me figure out solutions to problems when I need an extra push, but at the same time, he motivated me to learn things on my own. He taught me that ‘opportunities are golden, make the best use of it’, which stands to be my mantra of success,” she recounts. A born orator, she has conquered the stages of TEDx, National Leadership Summits, and World Education Summit.

Janet joined Sri Krishna College of Engineering and Technology (SKCET) in November 2016. At the time of her joining, SKCET was one of the top Autonomous Institutions in Tamil Nadu. “I had a strong intuition that I could help evolve SKCET as a University and grow with it, as an individual. With a diverse range of departments offering Undergraduate and Postgraduate Programs with state-of-the-art research facilities, I perceived that the Institution would be the right career choice to explore and deploy my academic leadership skills in the field of Engineering Education,” she says.

Growing up in an atmosphere so closely associated with education, Janet has maintained a keen observation of educational transformations.  “We have come a long way from blackboards and chalks. Students today are accustomed to an advanced level of learning through smart boards, flipped classrooms, MOOCs, industry-interactions, and internships and projects. Blooms Taxonomy has advanced to match the current generation’s trend of education, focusing on Higher Order Thinking Skills. Their learning culture has shifted from ‘bookish knowledge’ to ‘practical skill development’ through extensive use of project-based learning blended with cutting edge technology,” she says.

Education 4.0
She continues to say that Industry 4.0 has kicked off the thought process for Education 4.0 as well, and industry demands have raised the standard of education. SKCET’s curriculum focuses on skill development and sustainability, resulting in SKCET collaborating with leading Industries to establish Centres of Excellence in niche areas like Artificial Intelligence and Data Science. SKCET is also positively looking into introducing Future skill courses like AI – ML, Data Analytics, Big data, and IoT in the future. Watching the Indian educational domain, she comments that India has several people selflessly
working, in their capacity, towards the betterment of the society. Prominent educationalists like Kiran Bir Sethi and Safeena Husain are setting the footpath towards a revolutionary educational transformation in the current Indian Education setting. Meanwhile, corporate Women leaders like Debjani Ghosh (President, NASSCOM), Geetha Kannan (Managing director, Anitab.org India) and Ashni Dwarkadas (Hackberry) are some of the inspirational women who have reached great heights, raising the bar of education even higher.

These contemporaries are a source of enlightening inspiration for young women to pave their success road map. In her capacity, she, too, has undertaken several initiatives. When asked about some of them, she says, “giving back to the community is my passion, and as the Principal of SKCET, I am proud to have spearheaded the adoption of the villages and panchayats of Perur-Chettipalayam, Arumugakaundanoor, Kalampalayam, Madukarai, Thalaiyur, Pooluvapatti, Teethipalayam, Sulur, Vellaloor, and Sundakamuthur at Coimbatore, Tamil Nadu. I have always had the thirst to share my knowledge with those in need and my R&D proposals have been one way in which I could contribute to the society.” Similarly, the following women-specific projects were mentored and formulated by Janet that led to impactful women empowerment. 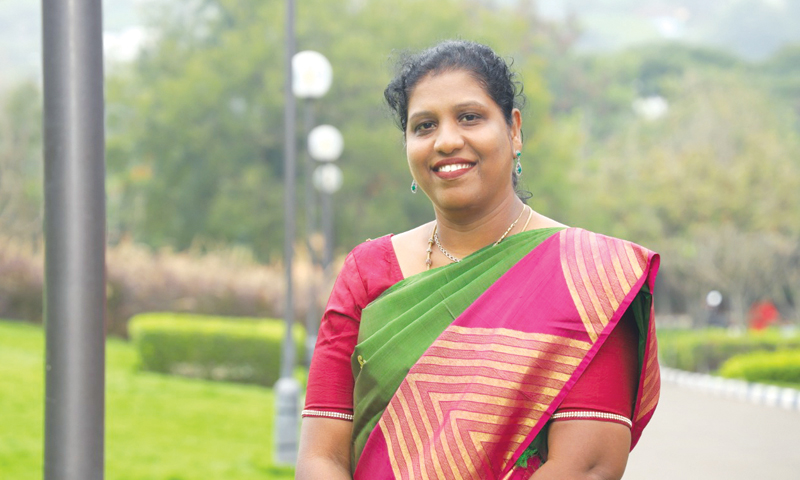 • DST SEED – Developing Women Entrepreneurs in the field of millet food production to ensure nutritional security.
• DST-CHORD – Unification of newness and social entrepreneurship economic empowerment of Rural Women in Coimbatore city.
• DST-WoS A – Impact of gender mainstreaming schemes in the science of government of India. The proposal focuses to gain recognition for the women in science by increasing the enrolment of women in Higher Education.
• DST-SHRI: Exploring and Eliciting the Royal Heritage of Badaga community, which enhanced the Civilization in the Nilgris.

Using her position as a respectable member of the society,

According to Janet, there is no tougher barrier than her mindset to an aspiring woman. It is time for women to stand up and shatter the glass ceiling and build our self-confidence. From her perspective, Janet has a couple of adages that an aspiring woman leader must have:

• Know and understand.
• Believe in yourself.
• Aspire and think.
• What you think will come to pass.
• You are more powerful than you know.
• A strong woman stands up for herself. But a leader stands up for everybody else. Rise if you fall.
• Never stop learning.
• Finally, never think you are not ready for something. Learn by doing.

All these she speaks from her experience. Janet says that she is a change agent and that if we work strategically, change is possible. “Be it system or people relationships, I believe that we can formulate and succeed if we put our mind and heart into it. All that is needed is a strong mindset, firm determination and a leap of faith to take,” concludes Janet.

• Declared as ‘The Best Engineering College in Tamil Nadu 2019’ for its outstanding and exemplary contribution towards education, skill development and research on 9th Dec’19 in New Delhi during the 12th Rashtriya Shiksha Gaurav Puraskar Ceremony
• Conferred with Second National Rank in SWACHH Campus Rankings 2019, consecutively for the second year amongst the Higher Educational Institutions in the country by Ministry of Human Resource Development, Government of India.
• Acquired “National Third Rank” for the One Student-One Tree Initiative in Jal Shakti Abhiyan for the exemplary green cover ventures initiated with Mega Plantation of 10,050 trees at SKCET campus.
• ‘Distinctive Citation’ for the category ‘Research and Innovation in Higher Education’ ‘Torchbearer’ in ‘Higher Education Category’ from India Didac Association partnered with MSDE, MIET, AICTE, Digital India, Skill India, and UNESCO.
• Received Academic Partner Excellence Award 2019 from ICT Academy.
• Accredited by NAAC
• Only South Indian institution to jointly offer an exclusive B.E degree program in Computer Science and Business Systems in partnership with TCS Ltd.
• Recognized with SIRO by the Department of Scientific and Industrial Research (DSIR).
• Selected as a nodal center for MHRD INNOVATION CELL.

An Academic Overview on Disaster, Governance and Development: Perspective from Bangladesh
Making HBMSU a Hub for Smart Education and the House of Quality in the Arab Region and Globally
Challenging the Stereotypes
An Intrapreneur Achieving Excellence in Higher Education
Dr. Geeta S. Lathkar- A Guidepost to Smashing Gender Norms
Seema Mahajan- A Connoisseur of Excellent Education
CONTACT US