The Youth Symposium: Where the Teens Takes Lead in Organizing E-Conferences 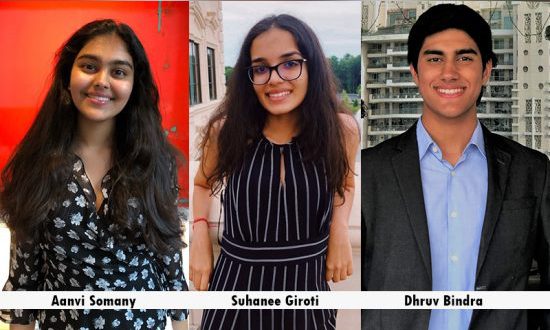 With the aim and strong will to increase youth involvement in global affairs, three brilliant students from the 12th standard, Aanvi Somany, Suhanee Giroti and Dhruv Bindra, founded ‘The Youth Symposium,’ a student-led project which organises e-conferences. In a time where everything is virtual, and standing out of the crowd is difficult, these three seniors decided to create a hub for student intellectuals to have their voice heard. They recognised that students have a lot of time on their hands, and therefore, they asked themselves how they could channelise their collective potential. They realised that there existed a gaping hole in the system: youngsters lived in echo chambers where their voices did not have an avenue to materialise into change. Since its inception, The Youth Symposium (TYS) has had the vision to empower such students and given them access to the right resources so that the entire world plays witness to their brilliant ideas. They hope to see more bright minds, like those of Malala Yousafzai and Greta Thunberg, emerge from this organisation.

Their conferences are focussed on topics of global relevance, like climate change, feminism, and equal access to healthcare. In each TYS session, they examine these problems in detail by discussing its effects on different stakeholders and produce robust solutions and policy briefs which are then sent forward to world-renowned organisations. Their motto is “discussions today for a sustainable tomorrow” as they aim to institutionalise their solutions and make a legitimate difference.

As a teenager-led organisation, they often found it challenging to gain legitimacy, gather an audience and write policy briefs, while simultaneously juggling academic pressure. However, after tirelessly working for hours and consistently sending emails to numerous organisations, they managed to gather support finally. They are currently affiliated with the tGELF foundation, the Hero MindMine Institute, the University of Michigan’s BlueLabs club, as well as the POP (Protect Our Planet) movement. With the support of these organisations, they have been able to garner international success and a large student base of over 300 students from 40 different countries. This has brought them closer to achieving their aim of becoming a global youth movement. In the past, they have conducted two large-scale conferences with experts such as H.E. Ms Rosalía Arteaga, the former constitutional president of Ecuador, as well as Mrs Anuradha Acharya, the founder and CEO of ‘Mapmygenome’ as their chief guest and keynote speaker. During these conferences, they used the “breakout room” feature on Zoom and with the help of their student volunteers, they were able to facilitate successful and productive discussions.

In their minds, the phrase ‘age is just a number’ should not just mean that you are never too old to achieve something, but it should also mean that you are never too young. In a nation of almost 600 million children, students have a massive potential to fight back against global problems. Through their organisation, they encourage these children to get involved and spark their journey to becoming a global citizen. Their team has exciting plans as they hope to franchise this model internationally by creating local chapters in different cities where smaller, more specific issues will be discussed. In this way, they want to become an initiative that not only targets global issues but local ones too.

Mudit Dani: A Young Paddler Juggling Brilliantly Between Academics and Sports
Dilemma of a Class 12 CBSE Student
Avantika Kampani: A 14-year-old Entrepreneur with a Tool that Enhances Newborns’ Capacity to Learn
Why is International Exposure Crucial in the Student Phase?
School of Basic and Applied Science, Adamas University hosted Webinar on ‘Steps towards Life : Chemistry by Noble Laureate Prof. Jean – Marie Lehn
J.P. Morgan will Donate 17 Crore to SAGE Foundation to Upskill Disadvantaged Students
CONTACT US