Home /BOOKS & REVIEWS/Poonachi: Or the Story of a Black Goat

Poonachi: Or the Story of a Black Goat 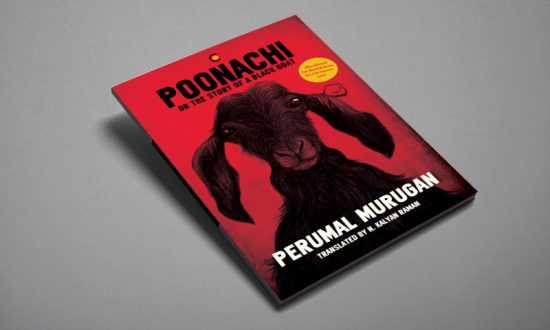 Till then, nobody has seen a goat giving berth to seven kids in one go. With Poonachi, it happens. She comes into the world as her mother’s seventh child, like a miracle. This report can be fictitious. But that is what the Bakasuran, a mysterious and a large stranger, told the old man when he handed over Poonachi for free. The old man had no other choice than believing Bakasuran and taking Poonachi home where an old woman and a bunch of goats are waiting. Now, Poonachi, who almost looked like a small black kitten, must live with her differences and survive in this world.

The concept of anthropomorphism, which is the attribution of human traits, emotions, or intentions to non-human entities, is not alien to us as readers. We have seen it in books like Animal Farm, The Wind in the Willows, Jungle Book and many more. Perumal Murugan’s Poonachi: Or the Story of a Black Goat falls into this category, where Poonachi, the black goat, has a woman-like emotions and it goes through the ordeals an Indian woman has to face in a patriarchal society.

Before we go into the details of Poonachi, it is important to know a little bit about the author, Perumal Murugan, who became the talking point of an entire nation with the release of a controversial book named ‘Maathorupagan’ which was translated to English as ‘One Part Woman.’ Though the book was published in 2013, it stirred controversies after a few years of its publication and Murugan, a Tamil Professor and a Novelist, gave up writing for a brief period after receiving numerous threats and intimidation. In 2015, he wrote on a Facebook post, “Hereafter, only P Murugan, a teacher will live.”

After 18 months from the time he announced his ‘death as an author,’ much to the relief of his readers, Murugan comes back with a thought-provoking novel, Poonachi: Or the Story of a black Goat. The novel, which has been translated to English by N. Kalyan Raman, can be explained in many ways. However, with so many characters and different emotions, Poonachi would keep the readers hooked from cover to cover. At the end, it will leave us with so many questions in mind and with so much affection to the creatures other than humans living around us.

How to Sell a Book?
Why College is not the Only Avenue Worth Pursuing?
How to Survive in a Troubled Economy
60 Clear-Cut Ideas That Make Handling Crises and Career Setbacks Easier
Seacom Skills University’s School of Pharmacy- Proffering a Holistic Pharmaceutical Education
Good news for Indian students planning to study in the UK! The two-year post-study work visa is back!
CONTACT US