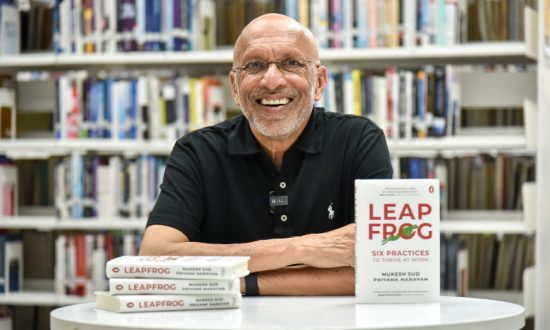 Prof. Mukesh Sud is an Indian writer who perspicuously weaves real-life examples in the form of engaging stories. His work/s is a true personification of his expertise gained over three decades of professional experience. His recent book manifests practical solution to the workplace and life problems that oscillates between his entrepreneurial and academic journey. Graduated from Indian Institution of Technology (IIT) Delhi, Sud became an entrepreneur, which was followed by academic profession. He completed his doctoral program at IIM Bangalore. After teaching for 9 years in the US he returned to India where he is currently at IIM Ahmedabad. Currently, Prof. Mukesh Sud is a visiting faculty at Ashoka University, Delhi NCR, and the Naropa Fellowship at Leh. Along with this, he also conducts executive education programmes on Design Thinking and Creating Entrepreneurial Organizations at IIM Ahmedabad.

Being an entrepreneur is primarily about dealing with uncertainty. Markets often move in unanticipated directions, customer preferences can be finicky, and rapid technological change can alter the landscape. Does the budding entrepreneur always have a plan to deal with these uncertainties? Or can entrepreneurs create opportunities from the resources already available with them?

There is a common view that entrepreneurs first identify an opportunity and then put together resources to reach their end goal. Saras Sarasvathy, who is a professor at the University of Virginia Darden Business School, wondered whether the perception about entrepreneurs fitted with the way they thought and acted.  In a research study she found that in conditions with a high degree of uncertainty, entrepreneurs adopt an entirely different approach to their decision-making. It is now a widely recognized method adopted not just by entrepreneurs but in a variety of contexts to address challenging problems.

It begins by seeking answers to three basic questions. ‘Who am I?’ This will help list the attributes and abilities. The next question is ‘What do I know?’ This includes education, training, and experience gained over time. Following this the third question ‘Whom do I know?’ This will help examine the social and professional networks that are embedded in and can avail of.

This approach can help entrepreneurs begin their ventures with the means at their disposal. In the next step they create partnerships with others who might later become stakeholders with them. The traditional approach to entrepreneurship centers around planning which is intended to avoid unexpected outcomes and surprises. Effectual entrepreneurs, on the other hand, welcome surprises and treat them as an opportunity for innovation. Rather than control the future by being strategic in their planning, effectual entrepreneurs build the future with partners and the means they have at their disposal. They adopt the mantra “to the extent that we can create the future we do not have to predict it”. Over a period, as the means at their disposal increase, this cycle gets repeated.

Social entrepreneurship is classic domain where entrepreneurs often try to tackle large problems without adequate means. Consider Mohammed Yunus, the Nobel Prize Winner who founded the Grameen Bank and is widely known as the father of the microcredit movement.

It all began with Yunus’s desire to solve a problem. As a professor of economics at Chittagong University, Yunus observed at close quarters the impact of the 1974  Bangladesh famine. At that time the poor, lacking collateral, had no access to banking credit. Yunus lent $27 of his own money to 42 women in a nearby village. This informal group stood as co-guarantors for each other. The women, who made bamboo furniture, had been borrowing money to purchase the bamboo sticks they needed. This loan helped them escape from the clutches of the money lender who was charging them usurious interest rates.

The small experiment succeeded and microlending today is practiced even by regular banks. The success of the Grameen business model has been replicated in many countries including developed ones.

With entrepreneurship full of uncertain futures and often coupled with limited means, adopting an effectual approach can optimize decision-making. After all Vinod Khosla, the famed Silicon Valley venture capitalist called effectuation, “the best theory of entrepreneurship you follow, whether you believe it or not”.

For more about effectuation read

The Importance of Liberal Arts Education – Today and in the Future
Face-to-face EduVersity: the New Blended Campus
The Importance of Sports Management
Why Financial Literacy Must Start Young?
Choice-Based Curriculum Encourages Inter & Multi-Disciplinary Learning
What Leadership Means in the Ed Sector – Leadership Through Teaching
CONTACT US