How Does Academic Research Complement Mainstream COP In Climate Diplomacy 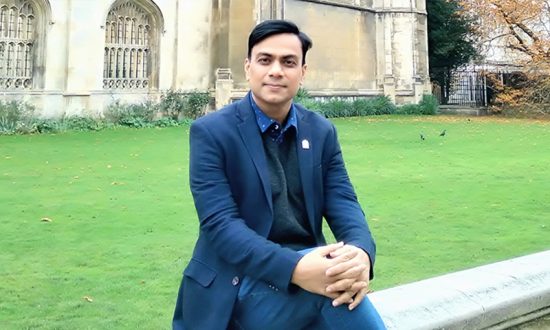 Dr Mohammad Tarikul Islam, an expert on local government, sustainable rural development, grassroots political participation, climate diplomacy, and foreign relations of Bangladesh towards South Asia and the UK, is an Associate Professor in the Government and Politics Department at Jahangirnagar University, Bangladesh. He has been a Visiting Scholar at the University of Oxford, University of Cambridge, and SOAS (University of London). The Higher Education Digest magazine proudly acknowledges the regular contribution of this brilliant South Asian scholar. In this article, Dr Islam emphasizes the promotion of research in mainstreaming Conference of the Parties (COP) into global negotiations. Based on his research work, Dr Tarik discusses the current trend of climate diplomacy of the government of Bangladesh particularly in post COP26. Professor Islam also tries to render way forward in order to create and sustain the institutional capability alongside individual competencies that are needed to enable government of Bangladesh to pursue climate diplomacy effectively and efficiently.

Climate change is one of the greatest challenges of the 21st century as increasing evidence of the impacts of climate change and those human actions are contributing to changes in climate. There is a growing apprehension across the world that attaining the consensus and commitment needed to take action call for positioning climate change in a broader foreign policy context. The perceived goal of traditional foreign policy is to provide stability and security as a foundation for human well-being, global harmony, freedom and prosperity. However, in today’s increasingly inter-connected world, the traditional instruments of diplomacy are not always effective in tackling global threats.

Established alliances and procedures are hard-pressed to be effective against a threat such as climate change, when the greenhouse gas emission is not the ambition of any one “unreceptive” influence. in order to address the climate change challenge, it requires new thinking in foreign policy—thinking that considers engagement on climate change not only in the sphere of environment, but also outside the milieu container. Science (climate scientists) and politics (diplomats and foreign ministry officials) may not always speak the same language, but climate diplomacy inevitably brings them together into a “marriage of convenience”.

Climate diplomacy tries to influence foreign governments and/or multilateral institutions towards certain policies and it seems clearly to have emerged as an integral component of international relations to complement the national efforts through tie up with international affiliations in mitigating and adapting the climate change. Climate change is growing in importance as a significant new arena of global diplomacy at the very highest levels.

As a developing country that is particularly vulnerable to the adverse impacts of climate change this presents a challenge for Bangladesh. At the same time, as the country gains in knowledge about the issue and starts to tackle it in earnest, it also represents an opportunity for it to play a leading role in the international diplomatic arena as well. In order to make the most of such opportunities different ministries of the government will need to enhance their capacities on the issue of climate diplomacy.

Bangladesh is a low-lying deltaic country in south Asia formed by the Ganges, the Bharmaputra and the Meghna rivers. The country enjoys a humid, warm, tropical climate. Its climate is influenced primarily by monsoon and partly by pre-monsoon and post-monsoon circulations. There is an increasing realization in the international community that achieving the consensus and commitment needed to take action requires positioning climate change in a broader foreign policy context.

The ostensible goal of western foreign policy is to provide stability and security as a foundation for human well-being, global freedom and prosperity. However, in today’s increasingly inter-connected world, the traditional instruments of diplomacy are not always effective in tackling global threats. Established alliances and procedures are hard-pressed to be effective against a threat such as climate change, when the cause (greenhouse gas emissions) is not the ambition of any one “hostile” power.

Addressing the climate change challenge requires new thinking in foreign policy—thinking that considers engagement on climate change not only in the sphere of environment, but also outside the environment box. The country pursues a moderate foreign policy that places heavy reliance on multinational diplomacy, especially at the United Nations. Since independence in 1971, the country has stressed its principle of friendship towards all, malice towards none in dictating its diplomacy.

As a member of the non-aligned movement, Bangladesh has tended to not take sides with major powers. Since the end of the cold war, the country has pursued better relations with regional neighbors. One of the core principles of the foreign policy of Bangladesh is to uphold the right of every people freely to determine and build up its own social, economic and political system by ways and means of its own free choice. This is a sign of venture of Bangladesh to ensure the right of its climate change affected communities. In an attempt to address the fundamental concerns, negotiation across level has emerged as an impending and worthwhile force for Bangladesh.

COP26 in Glasgow can be viewed as different from many previous COPs for one important reason. Everyone voiced the same call-in favor of delivery instead of promises. Arguments over targets and negotiation texts can only get us so far. You can hear it in the restlessness of protestors outside the conference fence, you can hear it in the determination of young climate justice campaigners to make their voices heard, you can hear it in the words of delegates from the global south where rising temperatures are already hitting livelihoods and lives. There is an increasing impatience pressing at the gates. The question they are asking: ‘but what are we actually doing?’

Adaptation and its financing were of particular importance at COP26, in view of the latest report by the Intergovernmental Panel on Climate Change (IPCC) on the increasing impacts of climate change. A UN committee will report on progress towards delivering the USD 100 billion per year, to be discussed again in 2024. However, COP26 has witnessed the highest ever commitments of climate finance to vulnerable low-income countries, about USD 450 million, as well as a commitment of USD 232 million to the adaptation fund, also the highest ever committed in a year. This fund can be accessed by all developing countries.

For Bangladesh, COP26 was of utmost importance last year. Bangladesh is persistent to apprise the global community of carbon emissions. Bangladesh strongly voices that, countries that are playing the biggest role in carbon emissions need to formulate and implement a specific ambitious plan in the form of National Determined Contribution. In favor of reducing the damage caused by climate change, Bangladesh urges the developed countries to set up a pledged fund of USD 1.0 billion annually and allocate half of it for adaptation and mitigation.

Bangladesh as a Chair of the CVF is constantly urging the developed countries to extend a helping hand to the most vulnerable countries by providing clean and green technology at affordable prices. Bangladesh is also serious in the global forum about sharing global responsibilities for migrants displaced by rising sea levels, rising salinity, river erosion, floods, and droughts.

Recognizing the urgency of the issue, Bangladesh has become one of the most active countries in the field of climate change planning and action. Bangladesh accounts for less than 0.35 percent of global greenhouse gas emissions, but it has taken a number of steps in recent years to encourage climate change investment. The key is to adopt a financial structure designed to channel more resources towards adaptation investment. At the same time, the new environmental guidelines encourage green financing, green banking, and the establishment of dedicated funds. Bangladesh is active in getting grants, especially from the international community, through the Green Climate Fund.

An initiative is underway to establish a public-private partnership system and a complete social system to establish a national mechanism for loss and damage, where the Reserve Fund under the Bangladesh Climate Change Trust Fund (BCCTF) has been set up to date at USD 100 million. COP26 is the best and perhaps the ultimate opportunity for Bangladesh to move forward and secure a brighter future for our children and our next generation. As countries begin to recover from the COVID-19 pandemic, we all need to seize this historic opportunity to tackle climate change: to make our planet better, and, greener.

Although not a significant contributor to climate change, Bangladesh is one of the countries that is most at risk from its projected impacts. In an attempt to address the fundamental concerns, climate negotiation has emerged as an impending and worthwhile force for Bangladesh. Despite this sort of encouraging effort, climate negotiations of the government of Bangladesh are not formally bent yet. Climate change has been one of the conspicuous encounters of the 21st century as increasing evidence of the impacts of climate change and those human actions are contributing to changes in climate. Addressing the climate change challenge requires new thinking in foreign policy thinking that considers engagement on climate change not only in the sphere of the environment but also outside the environment box.

BCCSAP sets out 44 programmes to be taken by Bangladesh in the short, medium and long terms within six strategic areas (food security, social protection and health; comprehensive disaster management; infrastructure; research and knowledge management; mitigation and low carbon development; and capacity building and institutional strengthening). The National Adaptation Programme for Action (NAPA) highlighted the prediction of changing patterns of temperature, rainfall, and sea-level rise in Bangladesh due to climate change impact.

Bangladesh pursues a moderate foreign policy that places heavy reliance on multinational diplomacy, especially at the United Nations. Bangladesh’s endeavor toward making the best use of diplomatic affiliation in an attempt to address the issue of climate change is noticeable. Bangladesh should attempt to strengthen the cooperation in this regard on the basis of “equal consultation, mutual benefit, and common development. The Ministry of Foreign Affairs (MoFA) has a major role to play in global climate negotiations. Bangladesh is found to play an effective role in this area.

To achieve the vision of becoming a rich country by 2041, Bangladesh must be capable of integrating all aspects of climate change into its planning and delivery of services to the citizens and ecosystems. The great move we observed was on May 14, 2018, as the cabinet changed its name to the Ministry of Environment, Forest and Climate Change. Bangladesh’s endeavor toward making the best use of diplomatic affiliation in an attempt to address the issue of climate change is noticeable.

Bangladesh should forge ahead with the advocacy persistently to convince the developed countries to set up the pledged fund of USD 1.0 billion annually and allocate half of it for adaptation and mitigation. Bangladesh as a Chair of the CVF should convey the same message like the past to the developed countries that clean and green technology should be shared with the developing countries at affordable prices. Last but not the least, Bangladesh must advocate for the welfare of the migrants displaced because of climate change.