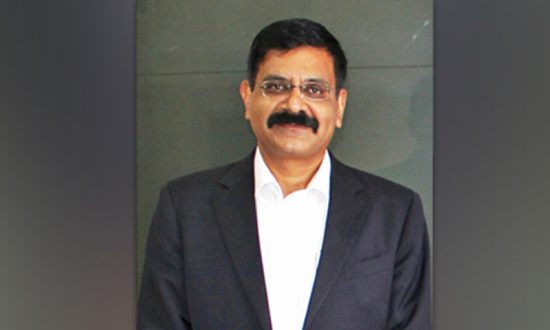 Dr Ajay has the unique distinction of bringing several global universities and institutions to the UAE such as University of Birmingham (U.K.), Babson College (Boston US), Inscape Education Group (South Africa) etc. through his efforts in building the market landscape knowledge, business case and supporting the local licensing, accreditation, institutional set-up and operations.

UAE sends approximately 15,000 students abroad per year, a number that has been increasing at around 3-4% per year.

By international standards, the UAE has a high outbound student mobility ratio: The percentage of Emirati nationals studying in tertiary degree programs abroad was 7.1 in 2016, compared with only 1.9 in China and 0.9 in India, the world’s two top-sending countries of international students in terms of volume, according to UNESCO. The total number of Emirati students enrolled in degree programs abroad more than doubled between 2004 and 2016, from 4,835 to 11,249. Between 2012 and 2016 alone, the number of outbound students increased by 31 per cent.

The most popular destination countries among Emirati degree-seeking students are the U.K. and the U.S.: In 2016, enrollments in these two countries accounted for fully 30 per cent and 27.5 per cent, respectively. India was a distant third with 13 per cent, followed by Australia, Oman, and Germany.

Current student visa data provided by the U.S. Department of Homeland Security show that students from the Emirates are almost exclusively male (90.6 per cent). The overwhelming majority (74.2 per cent) study at the undergraduate level with 45 per cent of students enrolled in STEM fields.

The growing outbound mobility in the UAE is likely driven by rising tertiary enrollment rates and an increasing student population, as well as by mounting interest in pursuing a top-quality foreign education as a means of improving employment prospects. Emirati employers reportedly prefer international graduates over graduates of local private institutions. Some employers also sponsor students’ overseas study in fields like engineering with funds and job offers upon graduation. Government bodies and academic institutions similarly facilitate students’ outbound mobility with a wide range of scholarship programs, many of them granted to students at public universities heading to countries like the U.S. and Canada.

While these schools mostly cater to the UAE’s surging expatriate population, the number of Emirati nationals enrolling in them is rising and made up 17 per cent of all enrollments in 2014/15. By some accounts, more than 90 per cent of students at international schools intend to study overseas after graduation, so this trend will most likely accelerate tertiary mobility.

The outlook for outbound mobility, thus, is favourable and underpinned by the growing demand for education overall. The UAE is currently riding the tail end of a youth bulge phase with more than 30 per cent of the native population still under the age of 25. The country’s tertiary, gross enrollment ratio (GER) jumped from 17.4 per cent in 2007 to 36.8 per cent in 2016, while the total number of tertiary students grew from 113,648 in 2011 to 159,553 in 2016, according to UNESCO. Although almost half of these students are foreign nationals, further increases in enrollments among the native-born population are likely in the years ahead. By some estimates, the number of students at all levels of education in the UAE will rise at an annual growth rate of more than 4 per cent until 2020 alone. 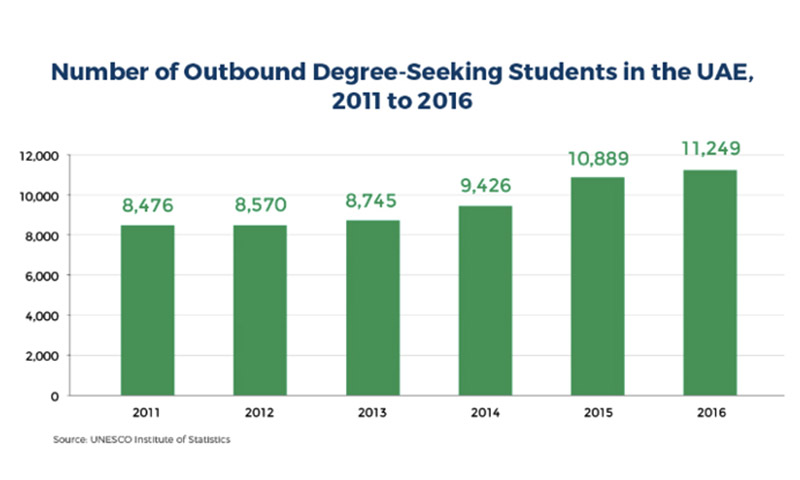 In addition to the Emirati students the large expatriate population, which is 89& of the total residents in UAE, adds to the outward mobility with an estimated 12,000 students going abroad for higher education.

U.S. and U.K. are the most popular study abroad destination, but recently Germany, Netherlands, Canada, Australia have emerged as high growth destinations. The reasons are visa ‘friendliness’ for Arab students and affordability plus work-study pattern for other nationalities Nonetheless, the U.K. and U.S. top the wish-list of most UAE study abroad segment, with the cost being the biggest inhibitor.

Inbound Student Mobility: One of the Highest Mobility Ratios in the World

Inbound student mobility to the UAE is enormous and growing at high velocity. As a small country, the UAE has lower total international student numbers than major international study destinations like the United States, the United Kingdom, or Australia. But its inbound mobility ratio of 48.6 per cent is easily one of the highest in the world and dwarfs that of all major destinations. The number of international degree-seeking students in the UAE recently spiked from 48,653 in 2011 to 77,463 in 2016, according to data from UNESCO. Illustrative of this development, the American University of Sharjah, a reputable UAE institution, is now said to be the university with the largest share of foreign students in the entire world: 84 per cent of its student body consists of international students.

Perhaps unsurprisingly, given current trends in labour migration, India is by far the largest country of origin of foreign degree-seeking students in the UAE: The number of Indians enrolled in degree programs in the Emirates has increased by 50 per cent since 2011. As per UNESCO, Indians now make up 17 per cent (13,370 students in 2016) of all international students. Other top-sending countries are Middle Eastern, like Syria, Jordan, Egypt, and Oman (all sending more than 5,000 students), followed by Pakistan. 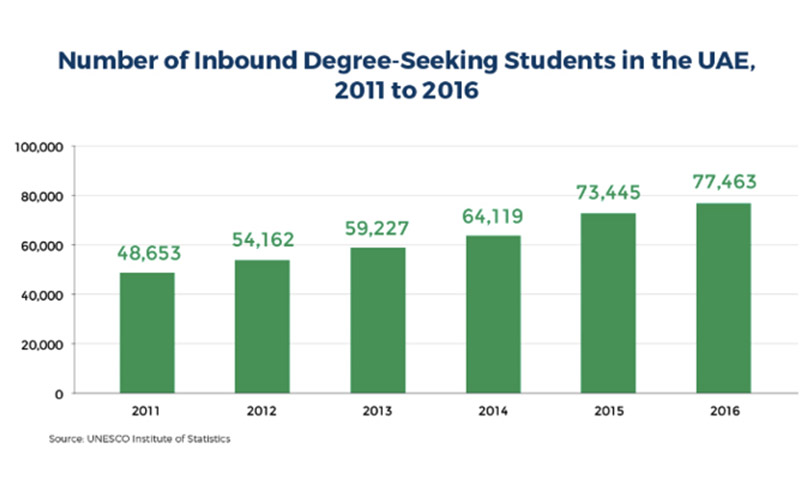 UAE is anything but a low-cost study destination. Mindful of this barrier, the government seeks to attract students by offering generous visa policies. Since 2016, foreign students have been allowed to work part-time for designated employers. In 2018, the government also drastically extended its one-year residency visa for foreign university graduates: Exceptionally talented students will now “be eligible for a 10-year residency, while other students can get a five-year visa, and dependents [of guest workers] will receive a visa extension to help them get started on their career after graduating.” Universities and government institutions also offer an increasing variety of scholarships for international students.

UAE is both a ‘source’ and ‘host’ market, with approx. 58,000 local and 80,000 international student enrolment, respectively (60% of these are UAE based residents).  Some of the characteristics are:

Demographically, population growth is expected to peak at 1-2% range however for the Higher Education sector this will lead to (and is leading to) universities allocating resources to international student recruitment as the domestic market will not be as lucrative as before (2010-2017).

Economically, while the inflation rate is just 1% in UAE the wage/salary increases are also indexed to inflation hence there is a demand for a cost-effective admission process as well as a move towards affordable higher education including scholarships, financial aid, bursaries.

Politically, UAE offers a ‘safe haven’ for students from regionally troubled countries like Iraq, Egypt, Syria who are facing challenges not only within their home countries but also ‘western’ HE hubs where securing visas and cost of education are daunting. In this context, UAE is positioned well to boost HE enrolments from these markets due to more affordable study options, liberal student visa regime and a relatively thriving employability market coupled with liberal work visas.

As a ‘source country’ UAE’s and GCC’s expatriate demand for a HE platform is significant.

UAE offers opportunities for international universities to set-up branch campuses in Dubai or UAE to get closer to their source markets, and this becomes even more important in the post-COVID world with travel, visa restrictions affecting international student enrolments in U.S., UK, Canada, Australia and other popular western higher education hubs.

There is also an opportunity for UAE based universities to attract and retain outbound (west or east) resident students by offering better value, leverage the world-class health and safety infrastructure and a more liberal visa and travel regime.

In fact, there should be a Study in UAE initiative to attract students from the Middle East, South Asia, Africa, Central Asia and China to UAE based universities – an idea I have been advocating for the past 5 years or so. Even a non-English language instruction country like Russia has a very successful Study in Russia program that works in partnership with the tourism offices of the government and promotes the benefits of studying in the country.

In the post-COVID world, a travel and tourism destination like UAE must also think about Edu-tourism where the ‘student traveller’ has greater stickiness to study and live and hopefully later on work in the UAE thereby contributing to the local economy, society and leveraging education for greater competitiveness for the country with a supply of talent for a knowledge-based economy. 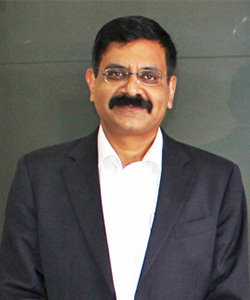 Dr Ajay has built his credentials with regulators and education investors through his high quality authoritative and ethically sound work and understanding of transnational higher education deeply.

Accessible Education for all: Why it Matters
Role of Financial Literacy in Empowering Youth
How to Test and Trust Your Intuition
Is Virtual Reality the Future of Education?
Ed-Tech Brands can Effectively Leverage the Growth Potential of the Current Market Scenario with Effective Communication
Higher Education – Challenges and Opportunities in the Middle East
CONTACT US