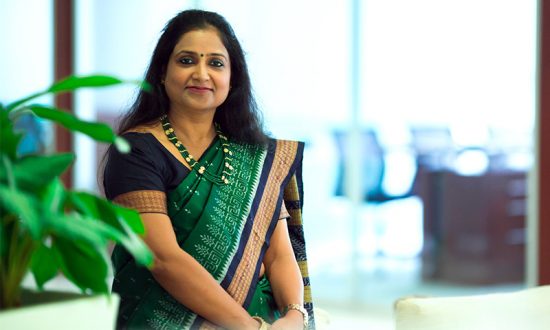 Totally approachable and down to earth, with forever a cheerful smile; that is Niru Agarwal, Trustee, Greenwood High School. Quite early in life, her leadership qualities were there for all to see, which found their true manifestation in her emergence as an entrepreneur par excellence, with a vision for the betterment of the society. Under her stewardship & unique approach to education, Greenwood High School has reached newer heights of excellence in moulding the young minds of tomorrow. Niru Agarwal is also the interface for the Group’s social commitments and welfare schemes and has been a prominent fixture in various charitable organisations.

Every year, we celebrate International Women’s Day on March 08 which highlights much about women’s struggles for equality in the world. However, a day in a year is definitely not enough to celebrate ‘being a woman’; it’s something to be celebrated and cherished every day by every woman. Unfortunately, in our country, we are still talking about gender inequality, disparity and discrimination against women, which exists in different forms. That’s why it is important to embrace the theme of this year’s International Women’s Day, #ChoosetoChallenge, which aims to challenge unequal positions that women are in and make women the center of decision-making across sectors including education.

The key to ending bias the world over is by providing women with proper education. This will strengthen economies and reduce inequality and contribute to more stable, resilient societies that give all individuals, especially women the opportunity to fulfil their potential. The ideas of challenging patriarchal spaces shouldn’t just be a slogan but should translate into reality too. It is indicative of expressing solidarity with women breaking the glass ceiling in different walks of life. Several women have effectively breached male-led bastions in diverse professions – be it education, politics, social sector or the, corporate sector owing to education.

Women’s participation in different structures enables holistic development of society and nation at large. It is crucial to sensitize people at a young age, so they become an integral part in bringing about a transformation of women in Indian society. When men start respecting women as equals, which can happen if a woman is educated and is independent in her own right, a lot of gender-based inequalities will reduce considerably. Today, I appreciate the fact that women head global companies. This is a sign of society maturing in terms of gender parity.  With improving sensitivity towards women, I am confident that women’s contribution to the GDP of the country would only increase as they are a very important economic actor. All this can be achieved when the country as a whole, its institutions and the family at the micro level ensure that women have access to education. This will go a long way in ensuring that women too can play a dignified role in being the bread winners of the family.

It is imperative to mention that a host of social activists have emerged in the recent past ensuring to protect the rights of women across the country, giving a ray of hope to woman folk both in the rural and urban area. Reports and studies suggest that the pace of development or change is much lesser in rural women than compared to urban woman. The work of the social activists will certainly give the much needed impetus to the female population there to claim their civil and human rights and the right to education.

Even in urban areas, the patriarchal system is followed by many households where, in majority of them, women have no say. All decisions are taken by the male counterparts. But, there certainly is hope – women today are finding the strength to shatter these walls and emerge into the limelight with sheer determination and grit. A significant factor to note is that, men too have come forward to speak for women and their rights, which is an exceptional welcome move in the right direction. People should perceive women as equal – equal rights, equal pay, and absolute fairness in all walks of life. It is our mindset that needs to change and at present, we see that it is slowly but steadily changing for the betterment of the society.

As thinkers, we must provide further impetus to the cause and must do our bit to educate the world on the vast pool of talent that we possess. As an entrepreneur myself, it gives me immense pleasure to see women breaking gender stereotypes and emerging winners. The country is steadily surging towards economic superpower with women beginning to play a significant role. I strongly believe the progress of any nation depends on the empowerment of women and we must work together and strive for equality and more opportunities for women.

Women are now open to taking up challenging roles to break the glass ceiling to prove their mettle. But the work-life environment for women has still not changed sufficiently for them to overcome the hurdles to join, stay and rise to leadership roles. While certainly the world has made some developments, there is still a huge gap which exists between the two genders in many aspects of life. No country can make progress if it locks out a half of its population. As Sheryl Sandberg said: “A world where half our homes are run by men, and half our institutions are run by women, would be a far better world!”

In closing, it is high time that we all step up and speak up for women’s thoughts heard loud and clear.