Home /INDUSTRY, INDUSTRY PERSPECTIVE/Sports Can Empower Young People with Intellectual Disabilities and End Discrimination Against Them

Recipient of the Dhyan Chand Lifetime Achievement Award 2010 by the President of India in recognition of his exceptional contribution to the Development of Sports in the country, Mr Satish Pillai, has been elected Chairman of Special Olympics Bharat. He is a keen and well-reputed sportsperson, having represented India in International Championships. He represented India in the Asian Games 1974 (Tehran) and in the first Asian Athletic Championship in (Manila) in 1973, in the long jump, winning bronze medals on both occasions. In interaction with Higher Education Digest, Satish Pillai talks about the advantages of sports for the development of children with Intellectual Disabilities, how is Special Olympics Bharat making a difference in the lives of young people, and many more.

It is universally accepted that sport is a great leveller. It exhibits leadership qualities, and it encourages teamwork. It improves social skills and reduces stress. Sports also gives a lot of confidence to individuals. Moreover, the health benefits of sports are known to everybody. But most significantly, it encourages us not to discriminate based on skill, colour or religion. When we are in the sports field, we are all equal. So, the sport has many advantages for the development of children with and without intellectual disabilities.

Recently, Special Olympics Bharat received a grant from Crown Prince of Abu Dhabi to make the Indian education system more inclusive. How are you going to use it to make education more inclusive for youth with and without an intellectual disability?

When we talk about inclusivity in Indian education, there are two types of schools. First, are schools who encourage children with intellectual disabilities and implement a unified sports program twice a year. These are called unified schools. And then we have the Champion Schools. Champion schools are schools which have three components that they implement – unified sports, encouraging youth engagement, and the whole school is involved in engaging people with intellectual disability as part of their lifestyles. It is not something that is shown as a favour. We do not want sympathy. We want empathy from people today. One of the major concerns currently to me is that people consider children with intellectual disabilities a liability. This is a mindset we are working towards changing.

WHO says there are about 2.5% to 3% of people with intellectual disabilities in any population. So, taking that into consideration, roughly there are 25 million people with intellectual disabilities in our country. SOB, directly and indirectly, touched over 1.5 million. There is a huge gap between the actual number of people with ID and the number of people we have impacted through Special Olympics. The problem with implementing any kind of program is resources – manpower and financial resources. This grant primarily focuses purely on education and schools, and that will be a big impetus to expand the program in an area that has a strong potential to realise the vision of the Special Olympics program.

We have identified about 120 schools from 12 States to help convert them into Champion Schools. This is not a change that will happen overnight. So, it is going to be a gradual process. The very fact that 120 schools will really start introducing this program is a great motivation for us. It will hopefully encourage other corporates and other people to also support this. We have been organising many programmes ever since this movement started. Now with involving schools, I believe that we have moved to the next level as youths are the future of any society and they the way the youth have embraced this initiative in the schools where we have stated the Unified schools’ programme is heartwarming. This grant will be a great catalyst for increasing this program further.

Who are the main beneficiaries of your programs, and how have SOB made a difference in their lives?

The direct beneficiaries are the Special athletes, but they are not the only beneficiaries.  Their families have benefited, and the society at large has benefited.

If there is a single child with intellectual disabilities who is kept isolated in the family, and suddenly that child becomes a leader, becomes somebody who succeeded in something like winning a medal for the country at the World Games. So, now the home where the child was once considered a liability is considered a hero. This benefits the whole family and the community around that family benefits as well. All these medal winners come back as champions.

In some cases, there are Special Athletes who have directly won a cash reward for their performance at the World Games. One such athlete hailing from a poor family was able to pay for his father’s surgery using the reward. So, these are cases where the family is benefiting from the child with intellectual disability, rather than the child benefiting from the family. 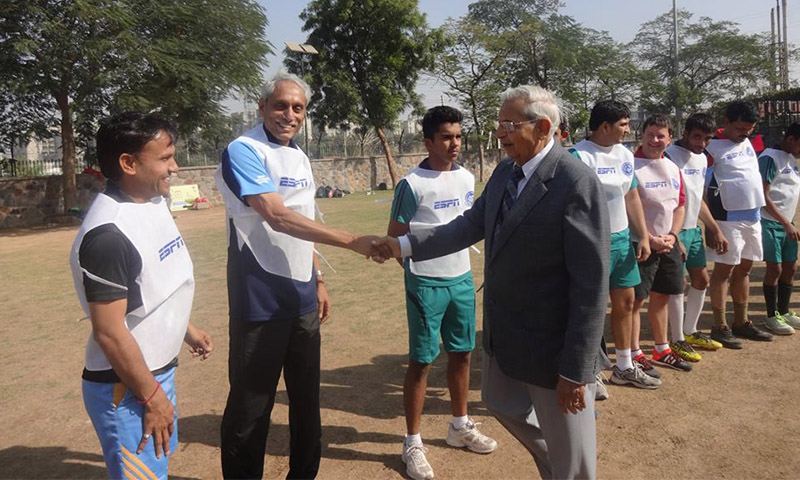 In addition to this, there are children who have participated in youth leadership programs where they are representing the society, representing this movement on International forums. This all contributes towards people beginning to accept that, yes, if you have an intellectual disability and you are not a liability, you can succeed as much as anybody else can succeed. Therefore, everybody is a beneficiary, the society, the families, the country.

What was the motivation behind setting up Special Olympics Bharat? Who were the people involved? And can you tell us a little about the key figures of SOB, their roles, and professional experiences?

Special Olympics was founded by Eunice Kennedy Shriver, who had a sister, Rosemary, who had intellectual disabilities. The Special Olympics Bharat chapter was started by Air Marshal Denzil Keelor. He is the founder as well as the CEO and monitors the organisation on a day-to-day basis.

The incentive for us is very simple – if any of us can do anything in society, which makes a difference in somebody’s life, that’s a great incentive. We do not need a bigger incentive, and I am glad that we’ve been able to really make this program one of the largest in the world. 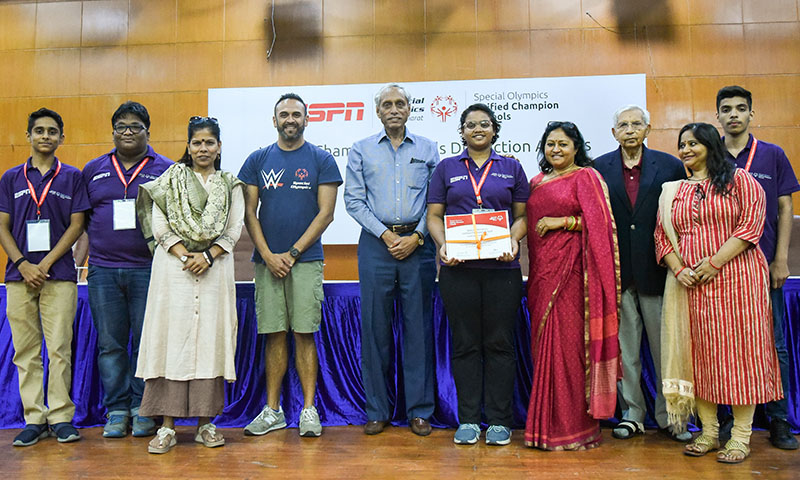 In terms of structure, apart from Air Marshal Keelor, we have got Mr Victor Vaz, our National Sports Director. Then we have got a large network of people at the ground level who have different roles and responsibilities. Each state chapter has an Area Director, who have their own team of people who implement the programmes at the state level.

What are some of the significant challenges in operations of Special Olympics Bharat?

The most significant challenge is that the numbers are huge, and the resources are limited. At the outset, we are very grateful to the Ministry of Youth Affairs & Sports, Govt of India, for designating SO Bharat as the National Sports Federation many years back, thereby demonstrating the greatest model of inclusion. This support has enabled us to send Athletes to the world Games in large numbers.

However, it also a challenge to reach the remote parts of our country.  There are challenges, but I do not really consider them as challenges. It is something that gives us a lot of hope. We feel that we have got a lot more to do than what we have done. The main challenge is to sensitise more and more people and make them more accepting towards people with intellectual disabilities and view them as part of society. We want people to not treat them as people with liability but people with different ability. For this, we must reach out to more and more people, and that in itself is a challenge. 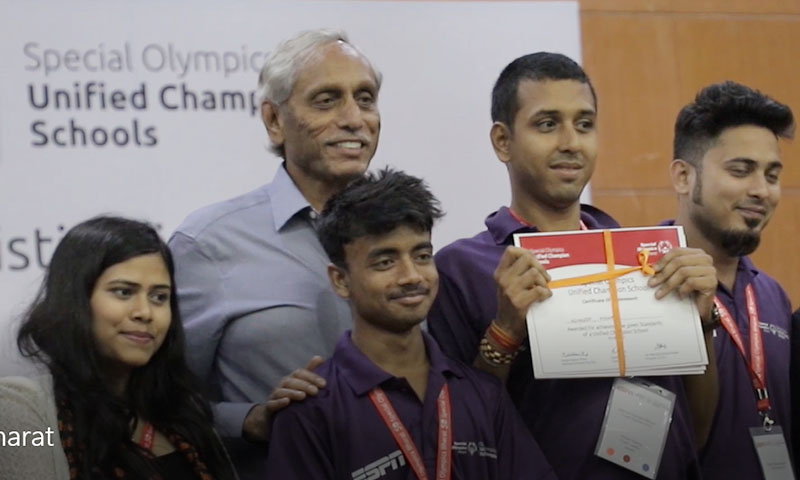 Apart from Unified Champion Schools, what are the other upcoming projects and/or programmes that SOB is involved in?

Coronavirus has become a big factor in shaping our upcoming plans. On the one hand, it has been a big setback for us because one of the main components in our program is interaction with people on the sports field. But, it has also proven to be an opportunity in terms of new ways to interact with our athletes and our partners. We have organised a large number of virtual webinars and interactions in the last few months, and we have realised that this is something we should continue even after the pandemic ceases to spread. We can do our outfield activities in addition to this and maximise our reach. So, there’s always learning from every difficulty in life.

Meanwhile, we are waiting to see how COVID-19 is going to affect the future programme and when we will be able to come back to mainstream sports programmes. So, we will have to rewrite our plans according to the situation as it goes in the next two-three months. But I can assure you that our outreach has not stopped. We will continue our endeavours of reaching out to our Athletes, irrespective of the challenges we face. 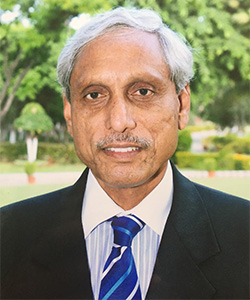 Satish Pillai’s association with SO Bharat goes back to over 20 yrs. He has been the Chairman of Special Olympics Bharat after being President of the Special Olympics Bharat-Jharkhand State Committee. Satish Pillai has been instrumental, not only in overseeing growth and development of the SO program in India but also in providing significant and sustained financial corporate support at both, National and International levels.

Satish Pillai served Tata Steel Limited for over 40 years, having retired as Advisor to the Managing Director in 2011. During this period, he shouldered responsibilities for several projects related to the development of Sports and CSR (Corporate Social Responsibility).

He has been a Member of the Confederation of Indian Industry (CII) National Committee on Sports, and on the Advisory Committee of the Naval Tata Centre of Excellence, Kolkata in Sports Management, in addition to being on the committee for several National Sports Federations. In 2009, Satish Pillai was awarded Tata Electric Companies Officers’ Guild Award for the Best Gentleman Sportsperson and was presented a Special Award for his contribution to the cause of sports, by the Tata Sports Club. This included organising sports in rural areas for persons with Disabilities.

With this background, Satish Pillai is well known and recognised for his management skills, sports achievements, social responsibilities, and the development of sports at the National level.

Gap Between Education and Ever-Evolving PR Industry Requirements
Role of Ed-tech Start-ups in Shaping the Indian Coding and STEM Education Industry
Narrative for Adaptive Learning in Test Prep Industry: How to Ensure Each Student Performance Improves?
Considering A Career In Cloud Computing? 8 Ways To Jump-Start Your Cloud Career!
Inculcating a Gurukul Methodology in the Indian Education to Improve the Employability Quotient
Experiential Learning: The Future of New Education
CONTACT US