Power of Plants: An Aeronautical Engineering Student’s Saga of Generating Electricity from Plants 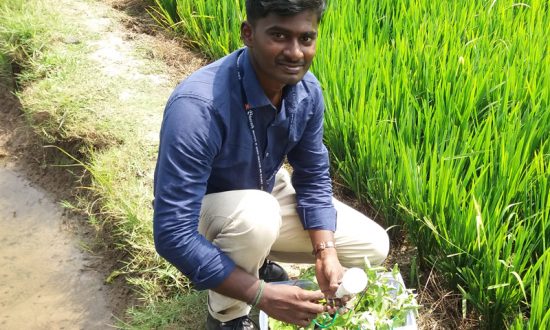 Vetrivel Anand, a final year Aeronautical Engineering student of Bharath Institute of Higher Education and Research, lives with his father in a rented apartment in Chennai. Aspired to become a volleyball player in his school days, Anand is now turning kitchen gardens into electric powerhouses using a scalable plant-based microbial fuel cell technology.

The summer is here and the power cuts too. What if we can switch on the fan using the electricity that we generated through our rooftop garden? It is not a science fiction, but a reality. Vetrivel Anand, who is in his final year of Aeronautical Engineering at Bharath Institute of Higher Education and Research, Chennai, has found a solution to create electricity from living plants. Anand has designed a scalable plant-based microbial fuel cell technology, which will generate electricity in the same area where the food is produced, or where the nature is protected. In the KPIT Sparkle 2019, an annual national design and development innovation contest conducted by KPIT, Anand’s innovation received second prize of worth Rs. 2, 50, 000. He has also applied for provisional patent for his groundbreaking innovation.

“Millions of people around the world do not have access to electricity. In our country, many villages are not yet connected to the electric grid due to the infrastructure challenges. But we have plants everywhere and using microbial fuel cell technology, we can generate electricity at a lower cost compared to solar and wind energies. This green electricity is absolutely renewable and sustainable,” explains Anand. Although, World Bank figures show that around 200 million people in India still lack access to electricity, India is doing a good job on electrification by connecting 30 million people to the grid every year. While we are aiming to achieve the target of universal access to electricity before the 2030, Anand’s idea of generating green electricity will not only help us in the electrification of remote parts of the country, but also will make our homes green again.

How does it Work?

Anand’s innovation works on a simple and straightforward principle. He says, “Plants excrete organic matter into the soil, which is broken down by bacteria. In this process, electrons are released. We can harvest them using inert electrodes and turn them into electricity, without affecting the plant’s growth in any way.” The electricity generated from roots of the plants can be stored into a Microbial fuel cell, a bio-electrochemical device that harnesses the power of respiring microbes to convert organic substrates directly into electrical energy.

Apart from a few researches that are happening in the northern part of the US, not many are working on generating electricity from plants, as there is a challenge in realistic scale up of this technology.

However, Microbial fuel cell was not Anand’s first choice when he started his research in second year of Aeronautical Engineering. “I was working on a solution based on Hydrogen Fuel Cells. But too many people were working on the same topic and I wanted to do something unique. After a few months of contemplation, I figured it out and started my research on Microbial fuel cell,” shares Anand.

Waiting for the confirmation on his patent application, Anand’s innovation is unparallel in our nation. Apart from a few researches that are happening in the northern part of the US, not many are working on generating electricity from plants, as there is a challenge in realistic scale up of this technology. But Anand is confident on its industrial use. He says, “It is possible to generate large amount of electricity, if we could use this technology effectively in the huge agriculture landscapes like rice paddy fields. Like, windmills and solar panels, we do not have climate dependency issues in making green electricity.”

Everything Happens for a Reason

Anand’s efforts in the realm of science and technology are now equally appreciated by the industry leaders and academic community. But there was time when Anand was cheered for his athletic abilities. As a volleyball player and an athlete who had participated in national level school games, Anand gained his admission in Bharath Institute of Higher Education and Research as a sportsman. Since education for sports quota students was free of cost at Bharath Institute of Higher Education and Research, Anand’s father, a tractor driver, did not contemplate much on moving to rented house in Chennai from his native in Tuticorin (known officially as Thoothukudi).

Today, Anand not only possesses the brilliance of a technology student but also has the determination of a sportsman who thinks of winning every game that he plays

But, life in Chennai had something else to offer for Anand. “My volleyball coach moved from our college five months after I joined. I did not know what to do and started focusing on my studies instead of sports, as I did not see any progress in my career as an athlete,” says Anand. Today, he not only possesses the brilliance of a technology student but also has the determination of a sportsman who thinks of winning every game that he plays. “The college management supports me very well in my research. They have given me all the facilities including laptop and workspace to continue my work inside the campus,” shares Anand.

Now, Anand is about to finish his Aeronautical Engineering and he expects three things to happen in his life before he comes out from the college; a job to take care of his family, a provision to continue his research, and a ‘Yes’ from ‘Gravity.’ “I have a one-side love story and I call her Gravity,” blushes Anand. In fact, when Anand participated in KPIT Sparkle 2019, Gravity was the name he had given for his team. He adds, “She knows that I call her by the name Gravity, but I never had the courage to talk to her about this.” But we are sure that with the kind of determination and never give up attitude, Anand will win this game too. We wish him all the best.