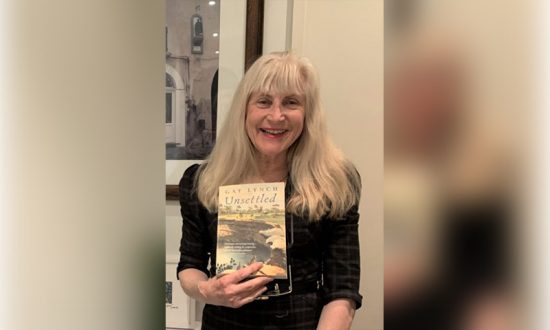 The book, based on real places and people in Melbourne and South Australia’s South East region – including Adam Lindsay Gordon and Father Tenison-Woods (of Mary St MacKillop fame) – borrows from Dr. Lynch’s Ph.D. study set in the mid-late 1800s. The project was first mentored by Irish writer Niall Williams, with input from Flinders colleagues, including Danielle Clode who has described the book, below.

Inspired by the imagined life of early settler Rosanna Lynch, who raced the stallion on which her brother competed in steeplechases against famous Australian poet Adam Lindsay Gordon, Unsettled is a “passionate and uncompromising exploration of the Irish, the feminine, the Indigenous, the nonconformist and the rebellious in our history,” says historical novelist Dr Clode on the cover.

“(Gay) Lynch seamlessly weaves art, culture, literature, and science through the fabric of her story, brilliantly evoking the complexities of early Australian settlement with its crude harsh realities and its finely wrought artistic and cultural aspirations.”

Dr. Lynch, who previously worked with Hannah Kent (author of Burial Rites and The Good People), Dr. Clode, Dr. Patrick Allington, Dr. Robyn Cadwallader, Dr. Gillian Dooley and other successful writers and critics at Flinders, also will present at the conference on the topic ‘Too Sexy to be a Settler: missing Irish diasporic girls”.

In this research, she seeks to understand why girls disappear from many family stories, right up to the present time, and how representations of Irish girls and their sexuality can be contested.

Under the theme of ‘Foregrounding Irish Women: The Antipodes and Beyond,” the ISAANZ (Irish Studies Association of Australia and New Zealand) conference features many Flinders presentations, including sessions chaired by the conference organizers Dr. Stephanie James, Susan Arthure, Dr. Fidelma Breen and Dr. Dymphna Lonergan.

Keynote speakers are Professor Regina Uí Chollatáin (University College Dublin) who will speak on the Women of the Gaelic Revival: ‘Influencers’ or ‘dilettantes toying with this strange archaic language, who had little else to do and were just following a whim or fancy’ and Dr Sharon Crozier-De Rosa (University of Wollongong) who will cover ‘Irish women’s history and the emotional politics of nation and empire’.

How to Sell a Book?
Why College is not the Only Avenue Worth Pursuing?
How to Survive in a Troubled Economy
60 Clear-Cut Ideas That Make Handling Crises and Career Setbacks Easier
Symbiosis School of Banking and Finance- Presenting Game-Changing Avenues In BFSI Education
Never Use Tech Like a Textbook
CONTACT US