Home /STUDENT, STUDENT STORIES/Driverless Tractor: When a Farmer’s Son Delivered Solution Much Ahead of Automobile Giants

Driverless Tractor: When a Farmer’s Son Delivered Solution Much Ahead of Automobile Giants 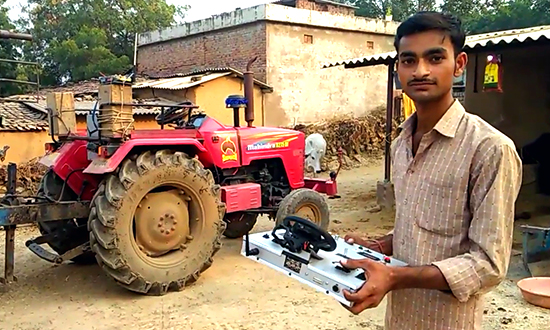 In College of Engineering, Indore, Yogesh Nagar is like any other student, toggling his time between classrooms, labs and library. Except a few faculty members and college administrators, hardly anyone knows that he has made a Driverless Tractor that has the capability to change the way we look at the farming in our nation. His story is an inspiring one for any technology aspirants.

Couple of years ago, natives of Kagla Bambori village in Baran district of Rajasthan saw something that they have never seen in their life – a tractor navigating through the streets without a driver. For a moment, villagers thought that the driver has abandoned the tractor and ran away for some reason. But, soon, they saw a teenager with a remote-control walking behind the vehicle, which was slowly progressing towards the farm land owned by Rambabu Nagar.

The news spread like a wildfire and people from Kagla Bambori village and nearby areas came in huge numbers to have a glimpse of this wonder tractor made by Rambabu’s 19-year-old son, Yogesh Nagar. Some of them were amazed and some were apprehensive. Some people even warned Yogesh and Rambabu for driving the tractor on road without a driver.

However, Yogesh and his father were determined to go ahead. They started creating awareness among the illiterate community of farmers about the importance of integration latest technologies in agriculture like driverless tractors, which can save a lot of cost and time in farming.

Yogesh was in first year of his college when his father, Rambabu, fell sick and doctors advised him to take bedrest. Yogesh did not have any other options than coming back home to take care of his dad’s farming. “When I was driving tractor in the fields, I realized that it can be driven without a driver too. In fact, autonomous vehicles have already been tested in other countries,” says Yogesh.

With a natural curiosity to figure out how things work, Yogesh started thinking about developing a driverless tractor. Materials available in the internet were his references. “I asked my dad to give to give me Rs. 2000 to make prototype of tractor that can be driven without a driver. But he could not believe that a tractor can be operated without a driver in it.” 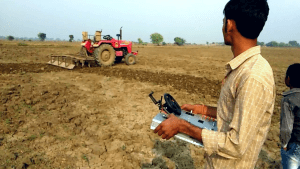 However, Yogesh persuaded Rambabu to get his first seed funding of Rs. 2000. Yogesh adds, “I collected all the materials to build a tractor that can go forward and backward using a remote control. With the help of a mechanic, I installed everything in our tractor, and it worked.”

Now, Rambabu was convinced and he wanted his son to make it better and bigger. “I needed around Rs. 50, 000 to make this tractor completely autonomous. My dad took money from his friends and relatives, so that I can continue working on my dream project.” 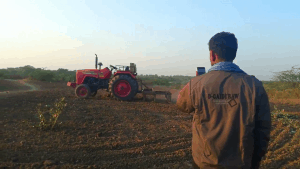 The next six months were very crucial in Yogesh’s life. He worked day and night to make his tractor ready to go to work without a driver. “It will take around Rs. 1, 50, 000 to make a tractor completely autonomous. But many people are ready to pay Rs. 2, 00, 000 if I make one for them too,” says Yogesh. Now, Yogesh can operate his tractor from a distance of 1.5 km a remote control that has 4.5 inch screen to see what’s happening on the field.

Recently, Yogesh won second prize of worth Rs. 2, 50, 000 in the KPIT Sparkle 2019, an annual national design and development innovation contest conducted by KPIT. “I am now talking to various tractor manufactures to understand whether my ideas can be incorporated to their design and produce new-age tractors on an industrial scale,” shares Yogesh.

Some of the Indian and global automobile companies have already developed concepts of autonomous tractors. But, Yogesh, who developed and operated it much before than they did, deserves a lot of appreciation and support. “My biggest dream is to make something for Indian Army. If I can help our country’s army by making vehicles that can navigate challenging terrains without human intervention, that will be my biggest achievement,” concludes Yogesh.