B-School Opportunities in the Middle East 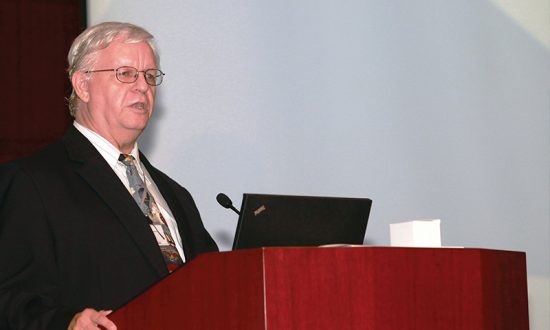 Dean Hoke is a higher education consultant and Co-Founder of Edu Alliance Ltd located in Abu Dhabi and Managing Partner of Edu Alliance Group in the US. Dean, since 1974 has worked in the higher education industry, serving in senior leadership roles specializing in marketing, communications, partnerships, and online learning. He served in senior positions at Higher Colleges of Technology and Khalifa University in the UAE before co-founding Edu Alliance. He is a member of the Board of Directors of the American Association of University Administrators and serves Franklin University School of Education Advisory Board. Dean has presented and written on higher education, leadership, international relations, and distance learning worldwide.

Beginning in the Fall of 2021, it appears that most of the universities will be returning to a near-normal situation. Of the 28,000 higher education institutions worldwide, business degrees have been the most popular academic program for students and employers. The Association to Advance Collegiate Schools of Business (AACSB) states more than 16,000 schools worldwide offer business degrees. This is also the case in the 17 Middle East countries where there are approximately 700 post-secondary institutions. The vast majority provides various undergraduate and graduate degrees in the discipline.

A specific example is the United Arab Emirates which has 104 higher education institutions. They attract UAE nationals and children of expats who work in the country, individuals living in the country who seek advanced degrees, and tens of thousands of students from other nations, mostly from other Middle East nations and India. Based on the most current data, 58 institutions in the UAE offer a Bachelor’s degree or higher in the general discipline of business.  A further breakdown of the UAE shows: 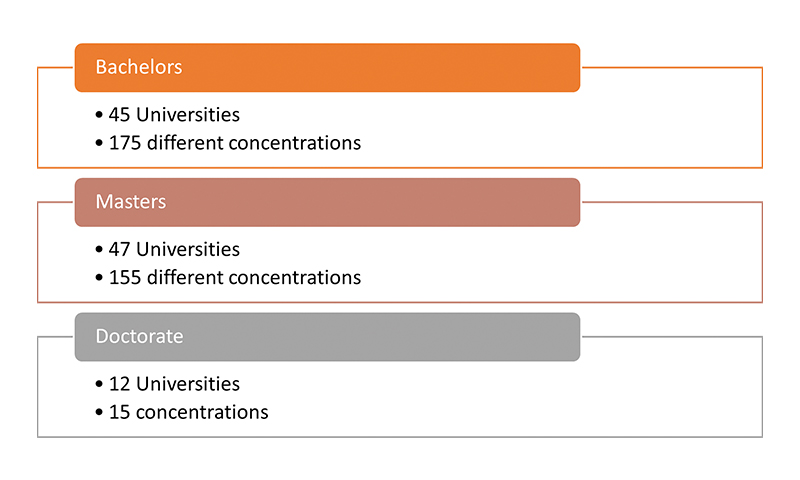 There is no lack of competition for students, and in fact, new online degree competitors are aggressively entering the Middle East market. More and more accredited US institutions with business programs offer their Masters and above programs primarily online. The University of Arizona who acquired Ashford University, Purdue University Global, who acquired Kaplan University, have entered the marketplace similar to Arizona State, Liberty, Southern New Hampshire, and the University Phoenix. In addition, top-rated universities such as Indiana University are also expanding their online offerings via their core university.   Potential graduate students living in the Middle East have numerous options to consider.

The question for current B Schools in the Middle East region is how to maintain or increase enrollment.  One of the favorite ways schools increased enrollment was offering new concentrations in business or beginning new master’s programs.  That is not necessarily true anymore.  Student needs are still pretty much the same. The parents who pay for the initial degree want to be confident their child will be employed and have the ability to succeed over the long term.   The student who now has graduated and working will consider the next step and a Master’s or above degree if they believe the return of their financial investment is worth the price.

Job Market in the Middle East

Employers who are now beginning to hire and promote employees still need people from the business school discipline.

According to the January 2021 Bayt.com Middle East Job Survey, large local companies (62%) and multinational companies (60%) in the private sector are among the companies with the highest intention of hiring in the next 3 months.  Throughout all industries, Business Management and Commerce account for over 40% of the educational and academic qualifications sought in a candidate.

While 45% of the companies are hiring junior-level entry staff, it is important to note another 55% are mid-management and above who have experience and academic qualifications. These qualifications and positions being hired are similar to past reports by Bayt.

Bayt also asked employers the skills most sought in a candidate 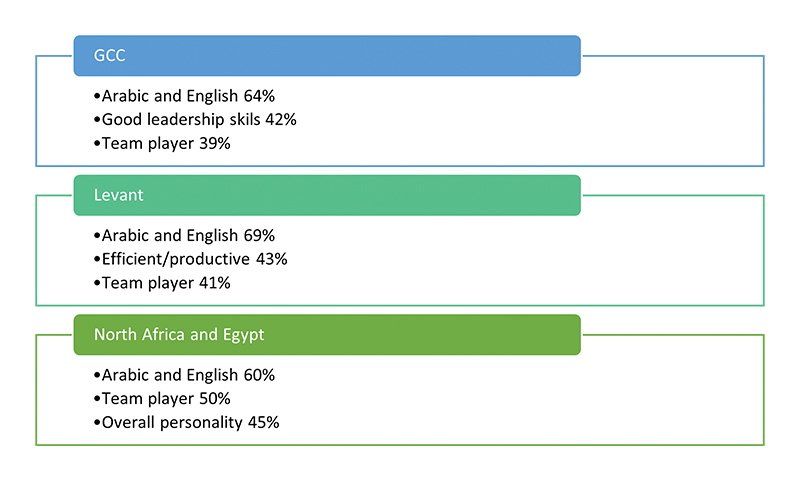 The attribute that is most sought after by employers throughout the entire region is good communication skills in Arabic and English.  This is an advantage for the universities with business schools in the Middle East that teach in English.

How to Effectively Increase Enrollment

You Have the Home Team Advantage

Being a local or regional school, you know the community and its people more than the out-of-country competitor. Your university has faculty and staff that live in the region. You also have a physical campus people can see and visit. You have local media who are more likely to do stories on your institution and its people. Your students are bi-lingual, which is a very desired attribute for an employer. They also, with your encouragement, can help build up lifelong networking among the students. At the undergraduate level, these are powerful tools.

Of the 16,000 higher education institutions worldwide that offer degrees in business, only 870 are accredited by the Association to Advance Collegiate Schools of Business (AACSB). 537 are US institutions, and the other 343 are located in 57 countries outside the United States.   It is considered by most employers the gold standard of business schools, similar to how ABETS is perceived in Engineering. Of the 343 international AACSB institutions, 23 are Middle East schools 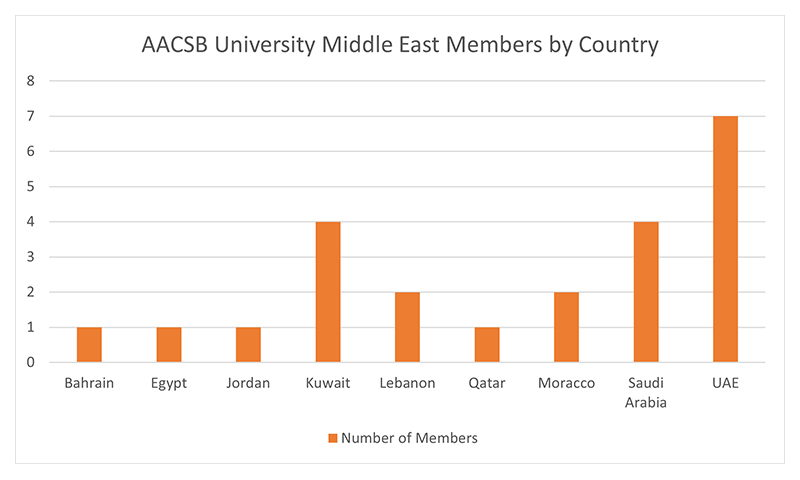 In addition to the 23 Middle East universities, an additional 15 Business schools with AACSB accreditation have established branch or satellite campuses in the region.

Middle east universities have not actively engaged their graduates. Most institutions in the Middle East have not kept up with where their alumni are and where they work. Upper-level students and alumni for 5 years after graduation usually struggle to establish a foothold in their careers.  While they liked the school they graduated from, many worried if their degree and cost were worth it. Many have doubts in their early years, and schools are not as helpful as they could be to support the young alumni.

I worked many years in my first professional job at a small private university with students and alumni. Though part of my responsibility was to raise financial support, a significant portion of my job was to help support alumni by arranging networking events in cities across the country. I introduced younger alumni to older alumni and let them know who was a fellow graduate at their place of employment. The University President and VP of Development took the long-term view that supporting students and alumni to succeed, they would remember the university once they were in a position to help. Don’t believe as a university, your job ends when they graduate. 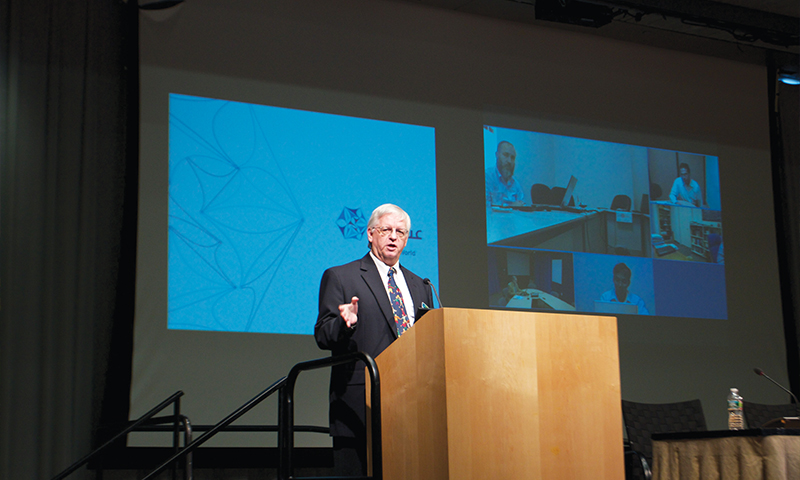 Build Your Reputation and Rankings


Worldwide ranking groups such as Times Higher Ed, or QS, or US News and World Report affect the decision-making process by parents, employers, and funders.  There is considerable debate in the higher ed community throughout the world of the meaning of these rankings and their being weighted towards research universities.   Applied schools will always be at a disadvantage, but never the less it is a reality. The rankings do enhance your visibility to the public and employers. It’s a matter of name recognition

Learner ‘Hacks’ for Higher Education
Out-of-Class Students’ Assignments: Does it Really Work in the Era of the Digital Age?
The Importance of Liberal Arts Education – Today and in the Future
Face-to-face EduVersity: the New Blended Campus
How International Students can Prepare for Universities and Employment midst of a Pandemic?
The Xth Education Revolution
CONTACT US