How Blockchain is Revolutionizing Cyber Security 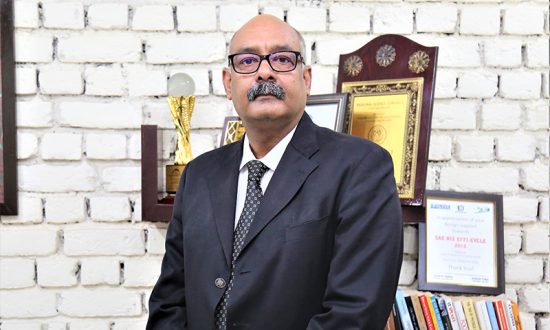 Started working with LPU from April 2007, Dr. Lovi Raj Gupta is a TEDx Speaker, Technology tyro, Head, Lovely Faculty of Technology and Sciences and Pro Vice Chancellor at LPU. He is a leading light in the field of Technical and Higher education in the country. His research focused approach and an insightful innovative intervention of technology in education has won him many accolades and laurels. He has been an Ex Vice Chancellor of Baddi University. He holds a PhD in Bioinformatics. He did his M.Tech. in Computer Aided Design & Interactive Graphics from IIT, Kanpur and B.E. (Hons) from MITS, Gwalior. Having flair for endless learning, has done more than 15 certifications and specializations online on IoT, Augmented Reality and Gamification, from University of California at Irvine, Yonsei University, South Korea and Wharton School, University of Pennsylvania. In 2001 he was appointed as Assistant Controller (Technology), Ministry of IT, Govt. of India by the Honourable President of India in the Office of the Controller of Certifying Authorities (CCA).

We have heard stories form our elders that generations back there were no legal contracts for any transactions, be it a land or money or a material or else. People were mutually trusting each other’s call and were trustworthy. When people started being  untrustworthy, the fear of transaction started abiding them and effectively reducing the  number of transactions for mutual cooperation or business relations. But then people found a way and made a third person, bit respectable in the society, to fill this lack of trust and add reliability in the transaction. Very soon, such a single respectable person was replaced by a Gram–Panchayat or a societal local panch – the most trustable group of members in the village. And then came the legal courts and legal contracts. But day-by-day increasing number of frauds, cybersecurity attacks, online phishing and above all the lack of mutual trust has left nowadays people to either avoid completely or to reluctantly activate the transaction. Be it, renting a house or an agricultural land, buying-selling an old car or using a mobile banking, any form of transactions comes with a bit of insecurity, fear and hesitation. This is not a good scenario for the growing markets and the economy. The simple reason for this lies in lack of mutual trust and reliability in the transaction. Both the businesses and the individuals need reliable transaction.

What is Blockchain Technology?

Blockchain is a network of computers that share and store blocks of information. Once entered a block of information into a network, it can neither be deleted nor be edited but on every transaction a new block encryption is added to it. In a way, it represents the complete sequence of transactions or changes in it.

What makes blockchain so secured?:

Blockchain technology is new and many think it to be related only with the cryptocurrencies. But not only it has been already in use by other application areas, it is considered to be applicable in many futuristic applications. IoT based data network, private and public messaging network, universal medical record keeping system, e-governance, finance and banking systems, creative arts and music royalty tracking, real estate, supply chain and logistics management,  agriculture – pre and post-harvest supply chain management, water chain management and many others are some of the application areas where the blockchain technology is already in use. As a key, wherever there is a need for a mutual trust and reliable transaction, blockchain can be applicable.

Let’s hope for a better world, in terms of more secured transactions to happen, through the highly disruptive and revolutionary Blockchain Technology in a near future..!

Out-of-Class Students’ Assignments: Does it Really Work in the Era of the Digital Age?
The Importance of Liberal Arts Education – Today and in the Future
Face-to-face EduVersity: the New Blended Campus
The Importance of Sports Management
How to Apply for a Digital Marketing Job With No Experience
Relevance of an MBA in the Era of AI
CONTACT US