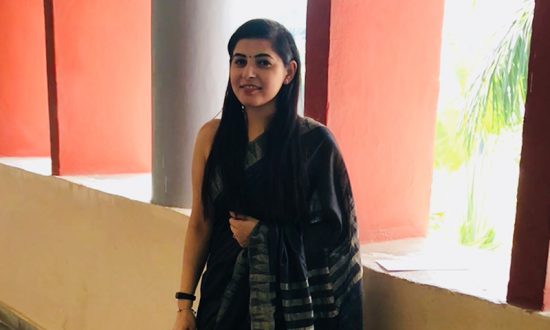 Trisha Jolly is working as an Assistant Professor at Janki Devi Memorial College, The University of Delhi for more than six years. She is pursuing her Ph.D. on research topic ‘Determinants of Inflationary Expectations: Insights from Recent Indian Scenario’ under the able guidance of Prof. (Dr.) Kavita Indapurkar from Amity School of Economics, Noida. Ms. Jolly has an extensive list of publications to her credit that includes her work on demonetization, inflation, macroeconomic movements, entrepreneurship among the others. She also has authored a book titled ‘Business, Entrepreneurship and Management’ in the year 2014. Her interest areas in research include price movements, international economics, and their macroeconomic impacts.

The world remained in its arrogance when novel corona-virus hit the world during the early weeks of January this year. Many countries continued to strut before realizing finally that lockdown is the only option. As if nature is playing a “statue” game with humanity.

India acted more humbly than the more powerful and capable countries of the world and announced a 21-day lockdown. Looking at the results of the lockdown, level of spread in other countries, and a few incidences where people could not recognize the graveness of the issue, the lockdown was extended almost unanimously for another 19 days.  This time the people are more sure that this will save the lives of millions.

The economic health of the country has taken a backseat. The lockdown has affected the supply and demand-side variables.

One of the important indicators that come under vigil during such testing times is definitely ‘inflation’. With improved social outcomes in terms of literacy and education, people’s anticipation about the prices also plays a major role in deciding ‘inflation’ at a given point in time. These, better known as ‘inflationary expectations’ have escalated majorly due to disruptions in the supply-chain backed by a sudden halt in production and distribution activities of commodities. Alongside, agricultural inaccuracies are feared to bounce because of the harvest season. This has added to the commotion amongst migrant workers. The citizens fear collapse or lagged supply mechanism followed by a sluggish macro economy.

Such circumstances have added anxiety among the people at large, altering their consumption patterns with raised use of electricity, the internet on one hand and almost nil consumption of those that can be consumed later, for example, a dinner in a hotel or a trip to Mussoorie. This also means that in the coming future, the consumption pattern is not likely to be the same as it was before the lockdown. There is a likelihood that there will be a case of pent-up demand on one hand and likely permanent change in buying behavior of street food/non-veg food. There is no doubt that the supply chain bottlenecks and suppressed demand have indeed worked as a leakage from the circular flow in the economy.

However, India’s powerful democratic leadership and its ability to tackle the challenge is going to remain fresh in the minds of people all over the world for a long time to come. If we weigh the current situation in wake of the fact that we have handled the pandemic better than almost all the countries of the world and this coupled with the likely international emotion against China, opportunities seem to be just a few months away from India. This situation will position India at unprecedented levels. Global relations are not going to be the same again. So we can very well say and believe that the situation is not all gloomy, and we can work further towards making this come true. Our approach was such that not only were we emphatic, we were also empathetic towards the sufferers all over the world and were able to help the world with our services in terms of medical kits, medicines along with doctors and nurses. With this we make our presence felt in the world opening another avenue for future growth prospects in the medical or cleanliness industry. Alongside comes a chance for a revival of our internal economy especially the manufacturing sector that has been sluggish in the country for many reasons. Entrepreneurship can be used as an engine of growth in the post Covid-19 era.

Now with the economy closing its border for imported goods (except that of essentials like crude oil and technology in certain sectors) especially from China for a while, it has opened doors to revitalize our manufacturing focusing majorly on the MSME or the small-scale industries. The way the pandemic has spread, and the way it has been tackled by the Government, big corporate houses have come to adore and therefore are expected to invest more in the social sector. Big contributions from various business houses have already started to pour in. This change in the attitude of corporate houses coupled with government support in terms of the various schemes and projects launched by them like Mudra Yojana will indeed restructure the sector which contributes to generating employment. With this comes brain-drain reversal to make our workforce better since many professionals who have come back may not be able to leave very soon and may join the workforce if provided good opportunities. The international diaspora coupled with inbuilt entrepreneurial drive in the country, if channelized in the right direction can reshape the sector in the country. RBI has also hinted reforms in the manufacturing sector will be supported by the ease in cash flow motivating further the workforce that was locked in homes, leaving their houses, and join their work commitments.

Given the emotional disappointment with China internationally, the main economies of the world should follow restrictive trade practices. India, like no exception, will also follow the suit providing a cushion to its domestic industry earlier suppressed due to the availability of cheaper counterparts from the rest of the world to pick up on production. Besides, domestic tourism and digital marketing will also contribute to the pool in a big way. This will further open avenues to introduce newer education policy introducing fresh courses and easy financing of the older setups in this sector and other. All this does not seem to come very easy but it is not a distant dream now. While it will add on the government’s expenditure as well but with the fiscal deficit figures in previous years between 3 to 4 percent of GDP and the commitment to maintain it at this level may defer for a short while but the revival of India’s crucial and growth potential sector with little higher expenditures for a year or two does not seem to be a very expensive affair, especially when it can solve the country’s one of the biggest problems, unemployment.

Such a perspective has left no page unturned and has coerced economists to dig deeper and chart a plan of action and policy framework to encash the pandemic to the country’s benefit.

Time to be “Agile” and not “Fragile” – A reframed perspective on Career Development
Educational Technology Trends in the 21st century
Reconstructing Narratives: A Bridge for the Next Generations
What Makes Public Relations a Fascinating Career Choice
Is MBA Right for you?
Events of the Past can Help Us Make Decisions During the Crises of Today
CONTACT US