25 Must Watch Campuses in India for Research and Innovation 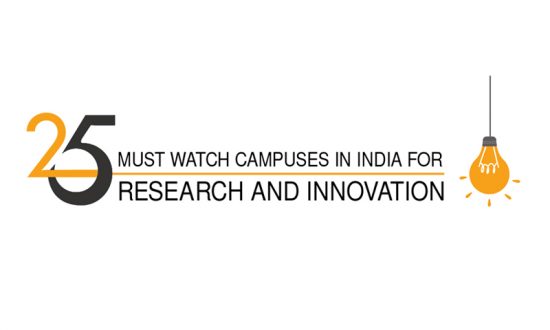 In schools, most of us have been reproducing textbooks without applying critical thinking. This did not change much when we reached college. We carried the culture of rote learning all the way to our higher education. In fact, it is hard to blame the student community for not having critical thinking ability, as the research has always been segregated from teaching in our country. The result of such traditional way of learning was an entire generation of students who graduated from the university system without producing even a single original research. In the recent years, however, we have seen a considerable shift in the focus of Indian institutions.

Most of the premier institutions now emphasize a lot on generating new knowledge and they have been collaborating with global universities and industries to foster the much-needed research culture in the campus. As per the market reports, India ranks 6th position for scientific publications and ranks at 10th for patents which included only resident applications. The number of patent applications filed by the Indian scientists and inventors has gone up to 47,857 in FY18 from 46,904 in FY16. It is also fascinating to see India’s improvement in the Global Innovation Index for the second year consecutively. From being ranked at the 66th position in 2016, India improved its ranking to 60th in 2017 and further to 57th in 2018. At present, the engineering R&D and product development market in India is forecasted to grow at a CAGR of 20.55 per cent to reach US$ 45 billion by 2020 from US$ 28 billion in FY18.

The inaugural edition of the Higher Education Digest celebrates the success of Indian institutions that have been striving to bring the research and innovation culture in their campuses. With the help of our advisory panel consisting of senior academicians and practicing industry professionals, we have come up with a list of 25 Must Watch Campuses in India for Research and Innovation. We sincerely hope that our efforts to feature the premier institutions imparting best facilities for research and innovation will help students and faculty members from all over the country in their educational journey.

25 Must Watch Campuses in India for Research and Innovation