Home /NEWS, STUDY ABROAD, TRENDING THIS WEEK/Tekla Festival: A Swedish Initiative Inspires Women of Next Gen into the World of STEM

Tekla Festival: A Swedish Initiative Inspires Women of Next Gen into the World of STEM 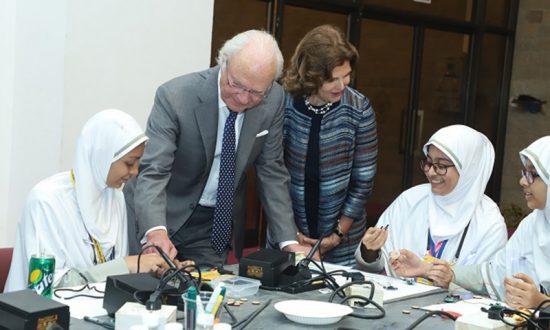 India and Sweden have long-standing diplomatic and trade relationships. Both countries are committed to the ‘2030 Agenda’ and have respectively played important parts in shaping the goals.  Whilst Sweden is the first country in the world to pursue a feminist foreign policy, India actively works towards achieving the fifth Sustainable Development Goal (‘Gender Equality’) for example through girls’ education and increasing female labour force participation.

Ms. Sigbritt Karlsson, President of KTH Royal Institute of Technology said “Even in tech-savvy Sweden, we struggle to engage females in technology. The mission to attract more women and girls to STEM studies and careers is about tapping into as much human talent and potential as possible. The longer this imbalance persists, the more society loses. Encouraging an early interest in technology cuts a path toward strengthening our society and ensuring that our university can develop competence and produce research at the highest possible levels.”

Encouraging a girl’s early interest in technology cuts a path toward strengthening our society and ensuring that the initiative can develop competence and produce research at the highest possible levels. The Tekla Festival was founded by Swedish recording artist Robyn 2015 in partnership with KTH Royal Institute of Technology in Stockholm with the aim of getting more & more girls involved in STEM.

“Tekla is a Swedish initiative, but the values of Tekla are universal. The global gender gap within the tech world represents lost opportunities for millions of girls and women. But it’s not only a question of gender equality. Surveys show that the economy will grow if women get to contribute. Our mission is to attract more girls and women to participate in the tech sector. For the benefit of us all,” Ms. Madeleine Sjöstedt, Director-General of the Swedish Institute added.

This year, under the guidance of Caroline Dahl, PhD, Technology Innovator at RISE, Chairman at Stockholm Makerspace and Board Member of Makers of Sweden the Tekla organized a workshop, where girls of age between 11 and 15 from schools of Mumbai took opportunity to explore, learn and enjoy STEM (science, technology, engineering and mathematics).

“It is important to introduce girls to different kinds of technologies and logistics for them to both explore and work in STEM. Tekla’s vision is to make girls learn about electronics.” Ms. Dahl said.’