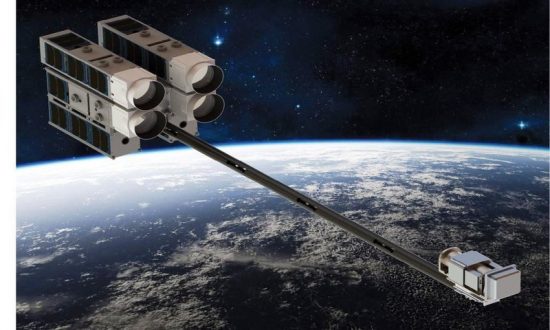 A collaborative effort between Caltech, the University of Surrey in England, and the Indian Institute of Space Science and Technology (IIST), a student-designed-and-built satellite is being readied for launch into orbit after nine years, where it will be a test bed for a new type of space telescope that assembles itself in flight from multiple components. The AAReST (Autonomous Assembly of a Reconfigurable Space Telescope) satellite is scheduled to be launched on an Indian Space Research Organization (ISRO) rocket early this year.

In 2008, a series of workshops at the Keck Institute of Space Studies (KISS) at Caltech inspired a low-cost mission to demonstrate the feasibility of sending a telescope to space in pieces and having it assemble itself once in orbit. That telescope, which came to be known as AAReST, was designed and built in large part by students in Caltech’s Ae 105 Aerospace Engineering class, working in collaboration with the Surrey Space Centre in England and the Indian Institute of Space Science and Technology. Over the years, these students planned the mission and designed the telescope. With the spacecraft nearly complete, 2018 marks the conclusion of the AAReST project for the Ae 105 students.

Over the past near decade, the Ae 105 students have dealt with countless design and technical issues regarding the project. The final design that the students came up with for the AAReST spacecraft features a central core unit that contains the attitude and control system, the radio and the antennas, and two rigid mirrors. Surrounding that central unit are two smaller spacecraft containing deformable mirrors that will be co-focused with the rigid mirrors on the main spacecraft. The whole package is small, measuring just 46 x 34 x 30 centimeters. Once in orbit, the two smaller spacecraft will detach from the main one via splitting bolts and then float about 30 centimeters away from the spacecraft before reconnecting to the main body in a wider configuration via electromagnets.

Ae 105 will no longer focus on AAReST, but there are still several details to be worked out before the spacecraft is launched, so Pellegrino will be taking a sabbatical during the 2018–19 academic year to work with the senior students on the project. Soon-Jo Chung, associate professor of aerospace and Bren Scholar and JPL research scientist, will take over Ae 105 and pick a new project for its students to tackle.

With telescopes, bigger is better: the larger their primary mirror, the more light they can capture and the better the images they can create. Currently, however, space telescopes are limited in size and must be folded up to fit inside the rockets that launch them into space. Hubble is 2.4 meters in diameter, for instance, and the James Webb Space Telescope will be 6.5 meters in diameter when it launches in 2021. To build a telescope that exceeds 10 meters, scientists and engineers will need to develop new, modular designs that can be sent to space in multiple pieces—even on multiple rockets.