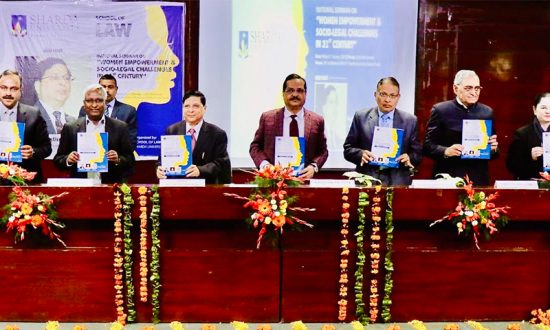 School of Law, Sharda University convened a seminar on January 31, 2020 on Women Empowerment & Socio-Legal Challenges in 21st Century. The seminar commenced with the inaugural addresses of Hon’ble Mr. Justice Dipak Misra, Former Chief Justice and by other dignitaries.

The inaugural session was the highlight of the event, with noted speakers from the legal fraternity as well as Sharda University top brass. Dean, School of Law Prof. Pradeep Kulshreshtha proved the perfect host as he spoke very high about Chief Guest Hon’ble Mr Justice Dipak Misra.

Hon’ble Mr. Justice Dipak Misra, Former Chief Justice of India dwelled at length as a veritable pioneer of women’s rights and led the discussion with his ideals of equality. Hon’ble Chief Guest emphasised that the rights of the citizens particularly women are natural rights, recognised by the Constitution and emphasized on its importance in the 21st Century. Hon’ble Mr Justice also dwelled on the doctrine of naturalness and principle of universalism while highlighting the leading judgments of Apex Court. As always, the speech of Hon’ble Mr. Justice Dipak Mishra was peppered with his characteristic humour which reeled in the spellbound audience. As a father of two girls, one got to see a side of the judge rarely seen in public as he emphasized his boundless love for his daughters.

Hon’ble Dr. Justice Satish Chandra, Former Judge of the Allahabad High Court,  also gave his two cents on the issue, drawing from his experience of being a witness to the myriad changes in law. He highlighted role of judiciary while citing judgments of Vishaka case.

Advocate Dr Chandra Rajan, who represented petitioners in the Triple Talaq case, shared her ideals of building a better society through fortification of the home base, a sentiment that was shared by the Chancellor Mr. P K Gupta. Hon’ble Chancellor also impressed upon importance of girl education and told if girls are educated then automatically whole society is well educated. Hon’ble Chancellor also spoke about the concept of empowerment even at the home level and how his daughter and mother influenced his decision making, personality and even his business decisions. He told that the University was christened as an ode to his mother, a befitting tribute to the impact of a woman as being permanent as opposed to an ephemeral change.

Guest of Honour Prof. P K Malhotra as well as the Vice-Chancellor Prof. GRC Reddy appreciated the fact that the National Seminar shall be a platform to debate and discuss women related issues.

In the technical sessions, more than 75 abstracts were received, which began post-lunch, chaired by Professors Arti Kaul, Dean, School of Education and Prof SP Srivastava, Faculty of Law, Central University, South Bihar, Gaya,  stalwarts in the legal field and Advocate Swati Arora, all of whom were supported by the faculty of school of law. Discussions revolved around collaboration on public policy issues; building social networks; reforming the cultural and sociological mindsets as well as dealing with stigmas derived from various sociological evils.

The seminar was well coordinated by Dr. Urmila Yadav and Dr. Ritu Gautam, along with the aid of enthusiastic students and research scholars. The event was an opportunity for the participants to discuss concerns and suggestions by the attendees. It also facilitated the exchange of opinions and expertise regarding economic policies and a discussion on how to face new challenges at the grassroots level.