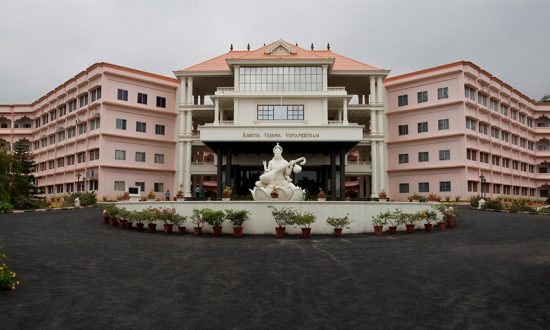 Amrita Vishwa Vidyapeetham has emerged in the Top 100 universities in the world in the just released Times Higher Education (THE) Impact Rankings. Holding 81st rank, Amrita is the only university from India to appear in the prestigious top 100 list.

THE’s Impact Rankings rate universities against the United Nation’s 17 Sustainable Development Goals (SDGs), which are global goals adopted by all UN member nations to improve life for all people in the world and protect the planet. They attempt to document evidence of the impact that universities have upon the society, in addition to their research and teaching performance.

Notably, Amrita has been ranked No. 5 in the world for furthering SDG4 (Quality Education) and No. 8 for SDG5 (Gender Equality). The varsity was also ranked 37th for SDG3 (Good Health & Well-Being); 52nd for SD6 (Clean Water & Sanitation); and between 101-200 for SDG 9 (Industry, Innovation & Infrastructure) as well as SDG17 (Partnership for The Goals).

“Times Higher Education are delighted by the performance of Amrita Vishwa Vidyapeetham in this year’s Impact Rankings,” said Duncan Ross, Chief Data Officer, Times Higher Education. “Their commitment to core humanity, that lies at the heart of the UN Sustainable Development Goals, shone through in their submission. India has a huge role to play in delivering a sustainable future for the world, and the work that its universities do, as exemplified by Amrita, is vital.”

Added Ramu Damodaran, Chief of United Nations Academic Impact: “To Chancellor Amma, and all who work with her at Amrita Vishwa Vidyapeetham, our gratitude and congratulations for their stellar performance in THE Impact Rankings for realizing the UN’s Sustainable Development Goals. Amrita joined United Nations Academic Impact in hosting an event in July 2015 for distinguished scholars to discuss the direct connection between academic research and the ‘dignity and worth of the human person. Thus, the premise of the UN Charter was dramatically affirmed.”

Said Dr. P Venkat Rangan, Vice-Chancellor, Amrita Vishwa Vidyapeetham: “Our Hon’ble Prime Minister started the ‘Institute of Eminence’ program to put Indian educational institutions within the top 100 universities in the world in 10 years. We are therefore very happy that Amrita University has found its place in the top 90 universities in the world in THE Impact Rankings. This is a testament to the vision of world-renowned humanitarian leader and Chancellor, Sri Mata Amritanandamayi, in setting the dual goals of education for life and compassion-driven research. The recognition would not have been possible but for the untiring efforts of our students and faculty. I am happy with the consistency in recognition to the academic excellence, outstanding faculty, and world-class infrastructure that Amrita Vishwa Vidyapeetham is known for.”

Under the guidance and leadership of its Chancellor, Sri Mata Amritanandamayi Devi, Amrita varsity has a long-standing tradition of focusing its research to uplift the economically challenged and other vulnerable sections of the society. This includes Live-in-Labs®, a credit-based programme through which students and faculty go to rural villages throughout India and, while living in those communities, identify and assess the villagers’ needs and develop and implement viable solutions. With more than 150 projects in 21 states across India, Live-in-Labs® participants have touched the lives of approximately 60,000 rural residents during the past several years, clocking 200,000 + hours in the field working towards sustainable development in rural communities.

Amrita has also drawn acclaim for its adult-literacy programs and provision of Internet literacy in tribal populations. The varsity has India’s first-ever UNESCO Chair on Gender Equality & Women’s Empowerment, runs a massive women-empowerment program, and is home to NIRF’s No 7-ranked teaching hospital that has conducted massive charitable outreach to the poor. The university is involved in a massive program to bring clean drinking water to 10 million people throughout India, among many other such programs.